These pix were taken by Steven Heddle (AllaboutOrkney), who is (in no particular order) a local Orkney Islands councillor (politician), IT guru, physicist, decent chap, some-time musician and trick cyclist (I almost made the last one up!). He was cycling up the top of a hill outside Kirkwall and took these shots. Brilliant!  He kindly let me put them on my blog - hence the build up to the introduction ;-)

Anyway to serious matters. Kirkwall is the main town in Orkney. Technically a city as it has a cathedral (any place in the UK with a cathedral is designated a city, whatever the size, apparently).[[see note below amd comments! - I'm confusing Kirkwall with being a Royal Burgh, it was given this status in 1486 by King James III of Scotland]].  St Magnus Cathedral is magnificent and construction began in 1154. It's a must to visit.

The population of Orkney is about 20,000 folk, and most of them live in or around Kirkwall which is the main centre for the Orkney Islands Council, Orkney Health Board, Hospital, supermarkets, banks, leisure centre and a variety of other local shops, businesses and schools. Orkney's airport is just outside Kirkwall, planes fly to Scottish Mainland airports, Shetland, the North Orkney islands and, occasionally, Norway. Most of the North Isles ferries come into Kirkwall Harbour. The main ferry to and from Aberdeen berths at Hatston, which is on the edge of the town. I always refer to Kirkwall as "The Metropolis"!

But remember Orkney is North of Scotland - and in this photo you can see the Scottish mountains in the background - this is looking South!4. The lights in the mid-ground are on the island of Flotta, which has the oil terminal. Orkney gets a share of North Sea Oil (goes into the Council Reserve Fund), along with Shetland. 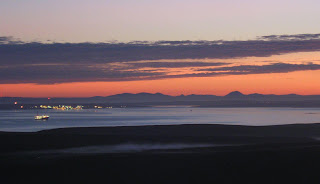 Note: - Bad me, making statements without checking the evidence!  In England and Wales up until the 16th Century a town was recognised as a city if it had a cathedral. I knew THIS was true because Wales (the Land of My Fathers) has St David's. So I was a bad researcher and extrapolated this in a very unscientific way to the rest of the UK!  See Wikepedia - what would we do without it! And bear in mind THIS isn't necessarily robust evidence either ;-)
Posted by Sian at 11:07