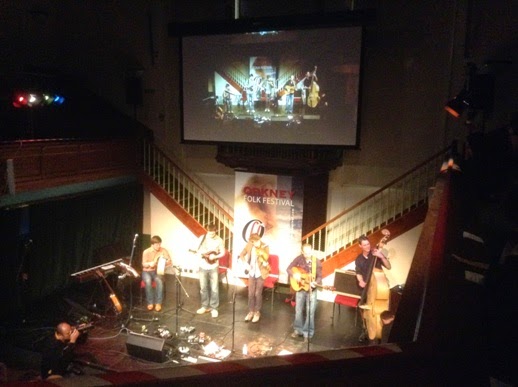 Orkney has a number of music and art festivals running through the year, though mostly from May to September. The end of May is the Orkney Folk Festival, which is mostly held in various venues in Stromness but also visits other parishes with concerts.  So on the Friday night I took myself along to the Stromness Town Hall for the Canadian Concert, which also featured an Orkney band!  The Orkney group of young musicians started off the evening with some great tunes, I think they were called Treebor, and were made up of young lads for whom I think this was their first gig (but I might have misheard that!).

I always go for the "cheap seats" in the balcony at the Town Hall because I get the best view there. I also had to leave early to get the last boat home, which unfortunately leaves at 9.30!  However I did get to hear Maidson Violet play. A Canadian band who had been recommended to me by L & J, friends in the US. 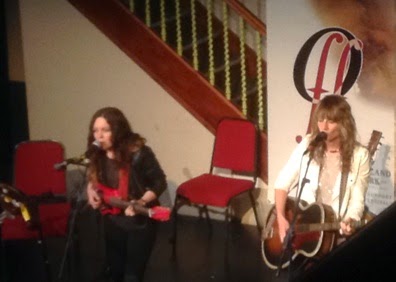 They played a lively set, and were followed by brother & sister duo Qristina and Quin Bachand. 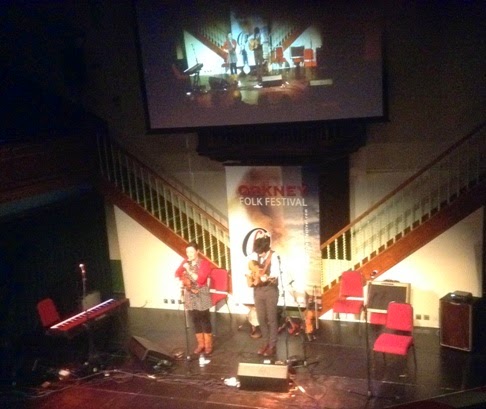 But I had to leave before I got to hear the Beaton Sisters who I think were also a great hit.

Because I have so much work on at the moment I couldn't find time to go to any other concerts, or any of the many impromptu sessions held in the bars and clubs around town.  As well as inviting bands from outside Orkney, lots of local folk groups play at the gigs too. Some musicians just travel up on the offchance of getting to play a set in one of the bars the festival is so popular. So as well as the professional acts you see on the various stages you can sample some great "unknown" bands playing too.  And there is a lovely buzz around the street, with some shops staying open later, and musicians playing in the street too.Lots of visitors come for the festival, and Orcadians who have moved away take the opportunity to return home too.

And in a complete change of tone, the National Theatre from London now provide "National Theatre Live Encore" which are a range of recorded performances screened at cinemas around the UK. And yes, of course Orkney is one!  The Royal Opera House (also based in London) does a similar programme.  So I managed to squeeze in two performances - the first "The curious incident of the dog in the night-time" was a compelling performance. I was gripped for the whole three hours. It was based on Mark Haddon's book, which I hadn't read, and a friend I went with thought that for once the dramatisation was even better than the book.  It's a tough story, and the acting was superb as was the staging. The actors must have been exhausted at the end of each performance as there was no formal "set" to speak of, and it was all action and movement, with pools of stillness.  For those that don't know the story, it's a kind of murder mystery, the victim being a neighbour's dog. The detective is Christopher who is 15 and has Asperger's Syndrome and the story of his frightening, disturbing, terrifying yet amazing journey to find the murderer, and much more.  It's a tough tale but wonderfully performed.

Then the following week it was off to "Picky" again (local name for the Pickaquoy Leisure Centre in Kirkwall). This time to see the Paris Opera perform Aida.  It was an interesting production. I was unfamiliar with the story but like a lot of opera it's all torment, death and a lot of singing ;-)  The singing was great, but this was possibly one case when a cinematic version of a live performance wasn't so good. When a great golden tank rolled onto the stage you could see it was on casters!  The story had been updated to represent - er- not sure what period, though according to critics it was Italy at some point to do with independence.  Ah well you can't win them all!  More productions due through the summer so I'm hoping to get to see them.