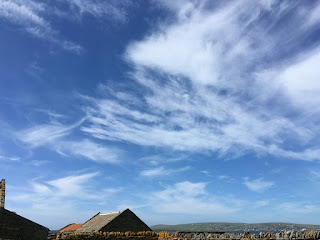 No it's not a chemical annihilation, but a wildlife survey organised by the Orkney Field Club.  I&T explains it better in his blog.  I'm just going to show pretty pictures. Haha! The day dawned fair, and warmed up nicely too.  I have to say, motivation is sadly lacking for me during "lockdown" but as the weather was so glorious and I wanted to do some gardening I though, why not take my camera anyway and see what I see.  Well I fairly cheered up after few successes of actually being able to take some photos of flying insects!
As part of the Bioblitz we could upload photos to a Facebook page for help with ID.  Um, is this a hoverfly I ask.....  nooooo!  It's a wonderful creature (well so are hover flies but...) it's a Mason Wasp, to be precise it is (apparently according to the experts) an ancistrocerus scoticus.  A 3 banded Mason wasp is the best I will remember.  They are amazing and it's possible it lives in the sandstone walls around the garden.  It makes little cement cups to lay eggs in.  It's a solitary wasp, and doesn't seem to be as aggressive as some of the wasp family. 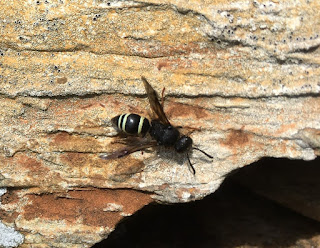 And then, when I was actually taking a photo of lichen, there was another mason wasp.... but..... a different species!!  This is a 5-banded mason wasp (Ancistrocerus oviventris).  I know!! Exciting... 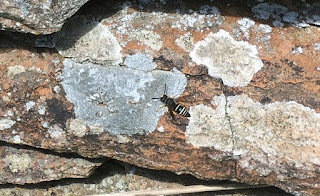 And then..... there was THIS.... a Great Yellow Bumblebee  (bombus distinguendus)
one of the rarest in the UK.  This is a geranium and is covered with bees most days. 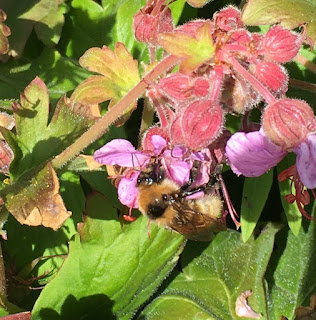 It was like winning the jackpot!  But with less money.....  there were other delights around too including these lovely carder bees, (bombus pascuorum) also part of the bumblebee family but more widespread across the UK.  They love the perennial cornflowers 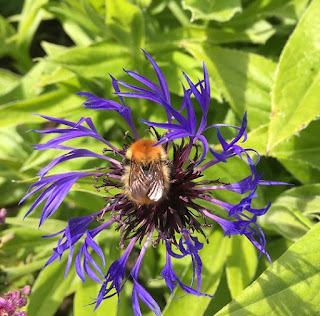 And the more usual bumblebees, that I call "buff tailed" bumblebees.  Obviously loving the allium! 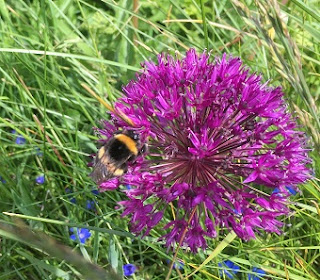 And there were lichens aplenty on the old garden dyke (wall). 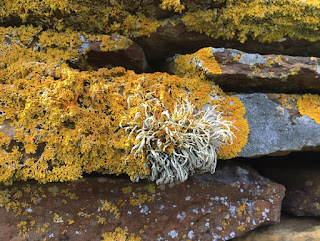 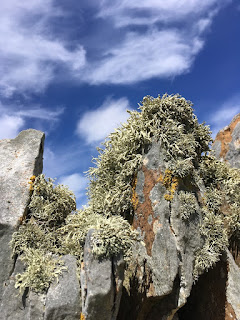 So I was fairly chuffed with all my "finds" (once the experts explained what they were - ahem...well I knew the regular bumblebees...).  And it's fired me up to go out looking for more creatures.  It also delighted me that there were so many bees in the garden.  When I first moved into the house the old garden was a wilderness of ancient grass and an old elderflower tree.  My gardening style is pretty feral which obviously pleases the bees!
I was working on this border after the bioblitz.  It's mostly trees and perennials.  It faces North so does struggle a bit and tends to be very green early in the Spring/Summer before getting a little more colour.  But it's one of my favourite borders.... 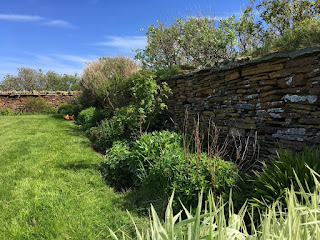 And you are never alone when you have hens..... (having a bit of a sunbathe here!) 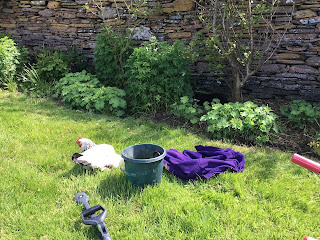 Invertebrates you say you want - let me help you find them... sigh! 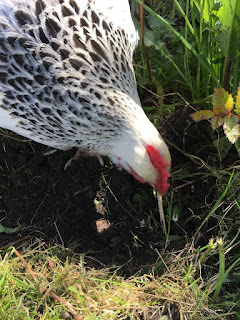 Button of course has to get some attention too.  Sunbathing.  No wonder I struggle to get something to grow here... it's her favourite spot... 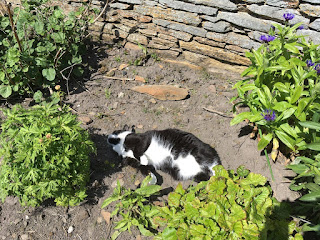 And then of course she gets too warm and seeks the shade of the trees! 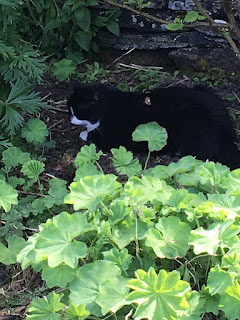 So all in all it was a lovely magical day.  And thanks to the Orkney Field Club Virtual Bioblitz for opening my eyes to the wonders in my garden!
Posted by Sian at 18:21