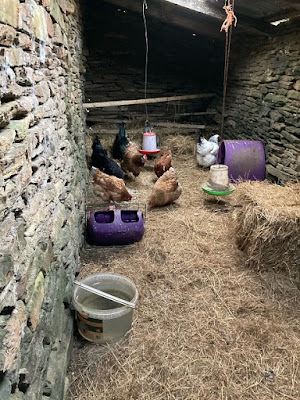 It feels like a plague year....... Covid-19 and now Avian Flu around the UK.  Sadly there was a case in Orkney just before Christmas, plus several cases across Scotland and the rest of Mainland UK. So DEFRA (Department for Rural Affairs including agriculture) have said that all hens, whether commercial flocks or so called "back yard" flocks, must be kept indoors.  So my poor hens are incarcerated into the stone henny house.  It's just about big enough for them I think.  I am fretting over them.  But so far no signs of pecking or bullying and all seem to get access to food and water.

DEFRA recommend trying to provide entertainment for indoor hens. I did wonder about a subscription to Netflix but they would fight over the remote.  Judging by their behaviour already I think they've been watching the films "Chicken Run" and "The Great Escape"!   They are starting to tunnel out! 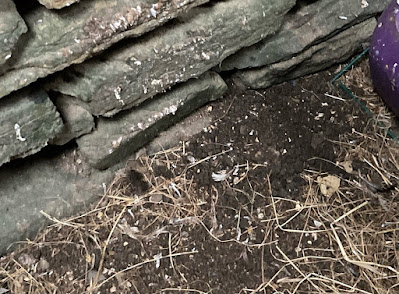 And I have to construct an obstruction so they cannot rush out the door.  I feel bad about that - they are always waiting by the door in the morning when I go to feed them.  They are so used to being completely free range (in and out whenever they want at any time apart from bad weather). 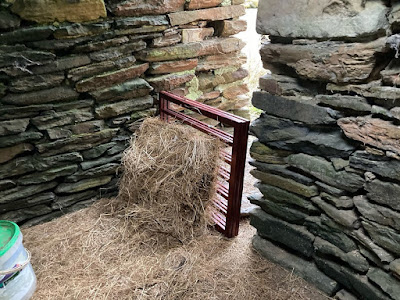 They are getting plenty of food.  Much of it sprinkled among the hay so they have to rootle for it.  They are getting their normal hen pellets in feeders, then wild bird seed and mixed corn scattered around.  Fresh fruit, swede (neeps in Orkney), pasta (they love spaghetti - maybe they think they are eating worms!).  They were getting brassicas (cabbage, sprouts, broccoli etc) but I am reliably informed that makes the eggs smell bad.  So now at least one hen has started laying again I have cut out brassicas.

They weren't that thrilled with the broccoli it has to be said...... though maybe because I had it hanging up!  They completely ignored it.  Even when cut down and among the hay they weren't that fussed.  Can't say I blame them.  Not one of my favourites either! 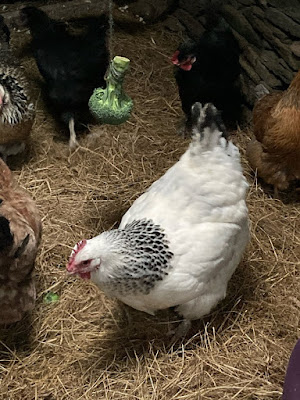 One thing they fall upon with glee are the tufts of grass I have been digging up for them.  My hens love eating grass - well the fresh young grass, less so the old grass.  It's been frosty for the last couple of days so I haven't had much success in digging up some tufts. 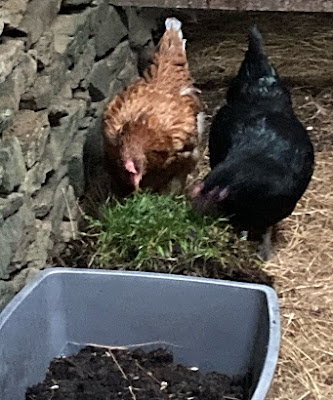 I had put a tray of earth in to see if they wanted to rootle around in it or have a dust bath but they have expressed little interest.  So on local advice I have replaced it with a tray of shell sand.  I will see how that goes.

Sadly they are likely to be incarcerated for about 12 weeks.  Maybe I do need to think about a Netflix subscription for them..... sigh....