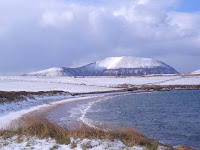 At least the cold North wind has dropped, but much of the island was covered in a layer of snow first thing this morning. However it soon melted, and although we have had frequent snow showers throughout the day there is little evidence of it.

All the schools in Orkney were closed, and all buses cancelled as I think the forecasters were predicting snow settling on the ground. These days the authorities seem to err on the side of caution. Apparently a bus did got off the road in Tankerness (East Orkeny Mainland) on Friday, though no one was hurt. So I suppose the bus company didn’t want to take any chances. 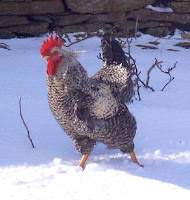 My hens were scratching about in the snow with Finlay keeping watch. Poor things their feet must have been frozen! I gave them their morning feed on a clear patch in front of the hen house and made sure their food hopper inside the henny hoose was full.

I haven’t been outside today, other than feeding the hens as it has been another work day. Though tonight I am off to the Graemsay Craft Night just for a blether as I am getting a bit stir crazy not being able to get out.

The Graemsay Craft Club is held each week when some of the ladies on the island get together to make cards and have a go at various other craft activities. I am an honorary member not being inclined to “craft”. Most of what the ladies make goes on sale at craft fairs on the island and the proceeds get split with some going into the island community association coffers. I love to watch them working but just don’t have the patience to have a go myself. I failed “cutting and sticking” at school!