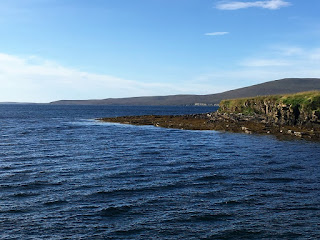 Here are some photos taken at the end of August.  Although to be honest they could have been taken today - except today is cloudy and raining.... but it is still mild.  The difference is in the sound... the swallows have flown south for the winter, as have many other birds, such as most of the oystercatchers, the lapwings and other shore birds.  Even the gulls seem to have vacated Graemsay - or at least fallen silent. There are plenty of geese around and the barnacle geese should be arriving soon too.  There are still the sparrows and blackbirds around in the garden. And still plenty of bees foraging for honey. But there is a feeling the year is turning.  Anyway....photos..... above taken near the Graemsay pier, looking towards Hoy.

This one also at the pier, yes the water around Graemsay IS that clear! Lovely to swim in, if a little chilly! 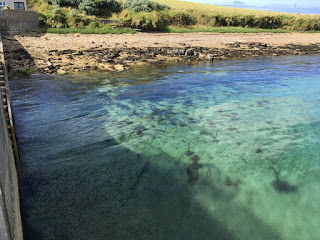 Meanwhile on the other side of the island a very atmospheric sky...... This is looking over Burra Sound to Moaness on Hoy. 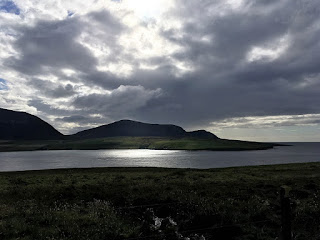 And a panorama of the Hoy Hills....

The fuschia and honeysuckle has done well in the shrubbery at the back of the house. 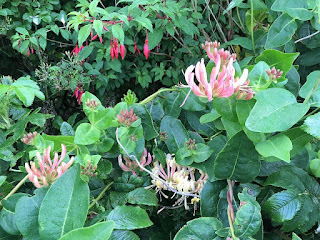 This is a new flower bed and the crocosmia "Lucifer" has flowered for the first time. I love the brilliant scarlet of the flower in the dusk 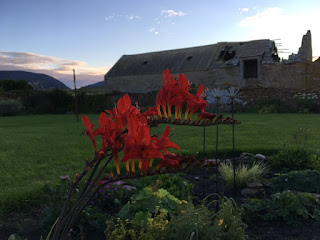 I had the best crop of strawberries for some years, largely due to the chicken netting being used to keep the girls OUT!  This is the last of them, but there have been several loads over the summer. 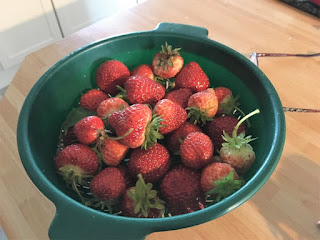 And this is a slime mould.  Euwww I hear you say.  I do think it is a tad sinister as it kind of moves along the ground - imperceptibly.  It's common name is scrambled egg mould as that is what it looks like, or dog vomit mould - ugh... I'll go with scrambled egg mould!  Lots of it around on the grass this year as it's been quite damp for a few weeks. 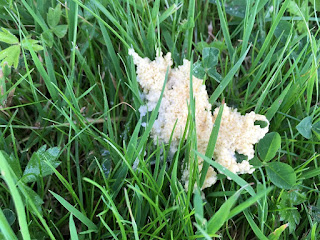 A cloud looming over Hoy High..... 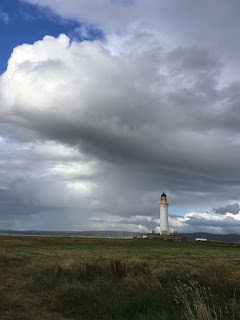 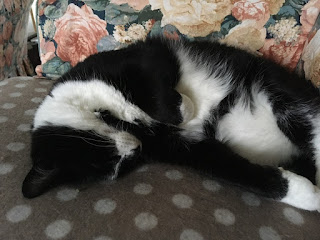 And to finish the day, a lovely sunset, before the sun slipped behind Graemsay till the Spring. 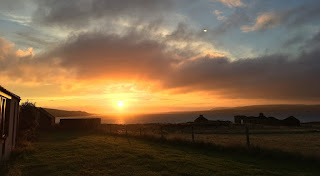