Today’s picture is of cloud over the Hoy Hills. It looks like the Brontosaurus of Hoy is still under the duvet! Weather has been changeable all day with heavy showers and periods of calm and brightness. Actually the photo of Graemsay on the right of my blog was taken from the top of the hill (Ward Hill) by a friend - and no I haven't climbed to the top myself - I just admire the photos! 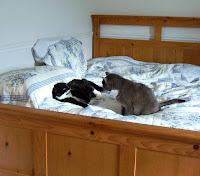 I’m still having adventures with the cats. We are all taking time to get adjusted. Jasper (grey & white, appears laid back) has clearly been upset by the appearance of Button (black & white, sassy cat) and had been off his food. He is also desperately trying to make friends with her. He appro 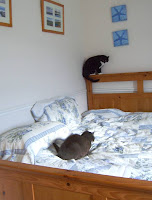 aches her (sometimes at the trot), ears forward, meowing what I assume is feline for “Hello will you be my friend?”. However Button is still less than enamoured by this, but despite her hissing and spitting he persists. And bless her, she doesn’t really attack him either, just tries to escape……. Generally I try and leave them to it, but she has sussed out that I *will* rescue her if she hides behind my computer! So of course that’s where she heads now.

Button also had an adventure of her own on Sunday night. She’s been outdoors a couple of times during the day and then demanded persistently to go out again at about 10pm. Well I was planning an early night so wasn’t keen. However she yowled and made such a fuss that I let her out. She still wasn’t home by midnight – despite me standing in pyjamas at the back door yelling “Button”. It was a still night – I suspect they heard me in Stromness. However as it *was* a lovely moonlit still night I went off to bed – gazing out of the bedroom window at the gentle lapping of the tide on the sandy beach, drifting off into a nice deep sleep. I woke up at 7.30 to a gale! Ooops – but over the noise of the gale, unmistakably was Button – yowling….. I let her in and got a mouthful of sharp meadows for my pains! Before anyone thinks I’m heartless – I had shown her the hay byres on our first venture out so I knew if she had any sense she’d find warm shelter there.

Anyway she has clearly learned something as now when I yell at night I hear her reply in the distance, getting louder as she gets nearer – she obviously prefers a nice cosy warm sofa indoors to the barn! She sleeps near my computer so I wouldn’t be surprised if she’s surfing the web during the night ordering a cat flap for her convenience!

One thing I have been advised to try is a “pheromone diffuser” – it’s like one of those plug-in air fresheners, but mimics the facial pheromones of a happy cat (kind of like Valium for kitties I suppose!). Anyway since I plugged it in, Jasper has returned to eating properly and things are a little calmer. Of course this could also be due to them getting used to each other!
Posted by Sian at 23:09

Email ThisBlogThis!Share to TwitterShare to FacebookShare to Pinterest
Labels: cats