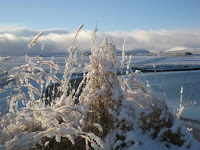 The snow almost disappeared over the weekend but then we had an inch or so fall within an hour yesterday! Today has been a bit of a thaw, more snow, thaw, snow, thaw, currently snowing... REALLY bored with this now!

I have plenty of supplies and no real need to get out (thanks to the wonders of the internet I can work from home - I work as a health researcher for UK Universities). However I'm getting "cabin fever" after nearly two weeks of either snow or gales. Whine...moan!  To be fair we haven't had as much snow as the rest of Scotland or the rest of the UK. Though buses on the Orkney mainland have and haven't been running and the airport is open then closed then open! Same with the schools. Yesterday it was announced the schools were open then they closed at mid-day due to the amount of snow falling!

Yesterday was also very beautiful though when it was snowing - huge flakes of snow.  So here are yet more pictures of snow!  And Button - who still likes to come for her morning perambulation with me but is glad we don't go too far!