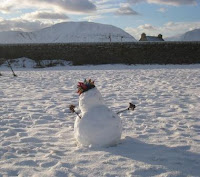 It was weird this morning as I opened the door to let Button out - all the snow had disappeared overnight!! The pictures in this post were taken yesterday afternoon -so it is incredible to think it has all gone in such a short space of time!  The Orkney Mainland still looks covered in snow and according to BBC Radio Orkney roads were treacherous this morning, with some schools still closed. However even on the Mainland it is thawing.

Hopefully the situation will improve further down on the Scottish Mainland and we can get further supplies into Orkney for the shops. I haven't been off the island for two weeks and the local shops I deal with have managed to keep me supplied with things I need, but I understand the supermarket shelves have been pretty bare.

A lot of the older Orcadians are saying that it is a situation like this which highlights how much Orkney has become dependent on supplies from outside the islands.  In the past all the isles would have had bakeries, and much more local produce was grown etc.  We are lucky that Stromness has an excellent baker but it is now the only one, years ago there were several.  Most of the milk in Orkney is locally produced and most folk have allotments, gardens etc. Meat and poultry are also produced in Orkney, but we are all so used to having "summer fruits" and supplies in the depths of winter that we wail when we can't get lemons for our G&T! Anyway hopefully now there will be the chance to stock up again before the next spell of bad weather.


I took the photo of the snowman yesterday when I went to the Graemsay Post Office.  The children at Hoy High had made this fine fellow in their garden, which also houses the island post office.  Yup - no shop or any other retail opportunities on Graemsay, but we have a post office!  For many years this operated out of the small building attached to Sandside, then it moved down to Clett, and in recent years has been at Hoy High Lighthouse in a building in the garden.  The opening hours are 7.30am Monday and Friday for about half an hour, and then from about 11.30 to about 12.30pm on a Wednesday. Needless to say most of us do our business on a Wednesday!  We also have our own postman too who collects mail from the island post box which is in the centre of the island and delivers it to the 8.25am boat Monday to Friday and receives the incoming mail, which he sorts and then delivers to each house. So yesterday I was able to go and get some parcels despatched and buy my "Christmas stamps" - now all I need to do is write the Christmas cards...... bah humbug!

Hope there is a thaw soon for those of you who are snowed in and there are no resultant floods!
Posted by Sian at 13:58