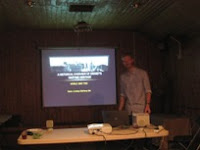 (I've amended my original blog post after receiving some corrections (I blame the wine I drank!) and some additional information from Gavin by email this morning).

Friday evening we had a talk by Gavin Lindsay, an archeologist and historian who is currently working at the Scapa Flow Museum at Lyness.  He was telling us about Orkney's role in WWI and WWII along with pictures and film clips. That's him above ...copyright "Gavin The Brand" ;-)

The first part of the talk was about Orkney during WWI.  I knew about the scuttling of the German Fleet, of course. But I was unaware that the island of Flotta, which is one of the islands further down Scapa Flow. Apparently during WWI this was a focus of land based activities by the Navy, although there weren't many buildings there, the lookout tower and associated buildings and defences were even designed to look like the bridge of a ship, and the base itself was regarded as a ship. There was also a golf course where officers went to play while on shore leave.  There was also the tragedy of the HMS Vanguard which blew up in 1917 while in anchor with the "home fleet". According to one web site report (not always reliable) a magazine below deck caught fire and the ship exploded with the loss of 700 lives.

Gavin also told of the first trials of planes taking off and landing on a ship, as these were conducted in Scapa Flow, just off Flotta. The Sopwith Pup, piloted by Squadron Commander Edwin Harris Dunning would take off from the deck of a ship which had had the deck specially cleared, then it would fly over to Swanbister at Houton on the Orkney Mainland and land on an airstrip there.  It would then have to be put on a BOAT and towed back to the ship and winched on board to continue the experiment!! Obviously a number of planes ditched in the sea during experiments - but the cost of a plane at that time was the equivalent cost of a shell so it was expendable!  Sadly Dunning, who was the first person to land on the deck successfully, died shortly after that landing as his plane tipped overboard on a later attempt. Gavin said today that there is still a pier there where they winched the aircraft aboard. There is also a memorial to Dunning.  Though extraordinarily there was no equipment to top the plane AND it had no brakes so it relied on the sailors on the ship grabbing hold of it to stop it going over the side!!

During WWII of course, Scapa Flow played a much larger part. This time it was again the safe anchor of the Home Fleet, but after the tragic sinking of the Royal Oak, by a U-boat, more defences were put in place, including the building of the Churchill Barriers. We were shown some interesting propaganda footage of Gunther Prien, the U-boat commander, being welcomed by Hitler, and making a speech about the sinking. Interestingly at the end of the talk Gavin showed us some of our own home-grown propaganda from "MovieTone News", where the jolly British narrator gave a morale boosting talk over film of British ships firing guns across the sea.

Graemsay also played a part in the defence of WWII.  Gavin was telling us that our search-light emplacements were of a design rare.  Here's a photo of one (courtesy of Tom Muir) - the light would be shone through the slits which would then enable it to cover a greater distance (Gavin gave a better technical explanation of this which I won't try and repeat!!). 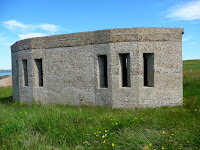 The gun emplacement was also unusual as it was not covered over, thereby not really being protected from air attack. However the main purpose of the Graemsy gun emplacement was as part of a team between that at Ness Battery and the one over on Hoy. Between the three of them they covered the Western entrance to Scapa Flow. (Again photo courtesy of Tom Muir). 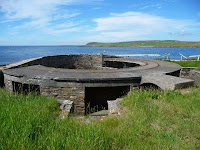 One thing that hadn't really occurred to me was that while all this naval and army activity was going on, the Orkney inhabitants were trying to go about their usual business. I can't imagine what a challenge it must have been to try and ship cattle and other livestock in open boats across Hoy Sound to market at Stromness, towed behind a small boat with an engine, never mind the fishing boats going in and out of the Flow!  Permits were required by all boat owners and naval boats would meet the vessel to check permits before it could be allowed into the harbour. Meanwhile the guns on Graemsay, Hoy and Ness Point at Stromness would have been ready to give a shot across the bow of any ship that didn't stop!  Apparently the old "St Ola" (a passenger and cargo ship) *did* require a shot across the bow as it was about to head into an area that had been mined the night before. According to Gavin the mines were dropped from the German planes by parachute.

The observation tower which is part of the Graemsay battery is so tall as the gun fired so fast it created a lot of smoke. So the tower was built high so that the gun could be directed onto the tower from the top level where the officer would be able to see over the smoke!  The window below would be used to direct the searchlights. 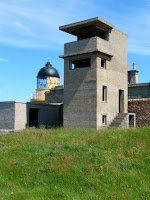 (Observation Tower, with Hoy Low Lighthouse in background)
It must have felt like the end of the earth to many of the service men and women who were stationed in Orkney, particularly given the prevailing Westerly wind, and on a day like today I can imagine the wind would be whistling through the accommodation huts and everyone would be gathered round the stove.

An interesting fact that came to light while talking to Ethel, our oldest resident on the island, who was here during the war, was that our Community Hall was in fact a World War I accommodation hut! You can still see the round cover where the stove flue pipe would have been.  It was originally in South Ronaldsay and was then shipped over to Graemsay in 1935.  Ethel was saying that during WWII the servicemen on the island were not allowed to drink inside the hall - they had to stand outside!  I can imagine us trying to reinstate THAT tradition now ;-)

Ethel also remembered the event Gavin spoke about of a German air craft flying low over Graemsay. Ethel has always said it was flying so low she could see the pilot!  Fortunately no bombs were dropped or shots fired that day.

Gavin also told us lots of other interesting facts too, but I think that's enough for one day. If you've made it to the end of this post I wish I could offer you one of the excellent home bakes that we had during our refreshment break..... sadly they're all gone!

But there are more photos of wartime Orkney on this website. You need to find "Fortress Orkney" here

Email ThisBlogThis!Share to TwitterShare to FacebookShare to Pinterest
Labels: wartime