A matter of interpretation..... 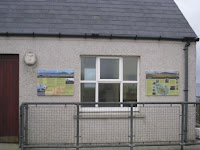 Above you can see the new interpretation boards that have been attached to the Graemsay waiting room at the pier. Both the boards were provided by the Scapa Flow Landscape Partnership, working in collaboration with the Graemsay community.  The Partnership has been working to have new interpreation boards put around Scapa Flow. It has to be said I have mixed feelings about such boards. I think they are fine on our waiting room - they give visitors to the island an idea of the history and flora and fauna. But I do get grumpy when I see interpretation boards out in a wilder more natural landscape. If I've staggered up a hill (a rare occurrence - that's why I chose to live on Graemsay, only 65ft at it's height!) or walked along a rugged coastal path, I love to marvel at the landscape, the remoteness of Orkney etc. I *know* many feet have trodden the same path, but - well I like to feel I *might* have been the first.  An illusion that is shattered when I come upon an interpretation board.....sigh.....

However I digress, and the new boards look smart and give a good snapshot of the history of the island. Including of course both the lighthouses, Hoy High and Hoy Low. Built by Alan Stevenson (one of the "Lighthouse Stevensons" and who was related to Robert Louis Stevenson, who did visit the island in the 196h Century. Someone has a photo of it somewhere!  I think it was taken outside Hoy Low. 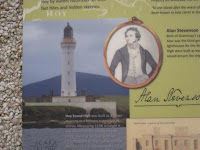 An example of some of the plans for the lighthouses 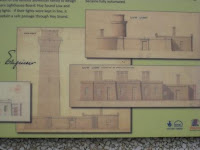 And some photos of plants (always useful I find!) and some info on the various beaches around the island. 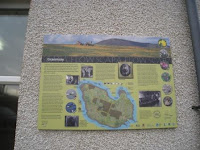 Apparently there will also be a leaflet or something available on the Orkney Mainland at the tourist offices, showing the coastal walks around the island.  Always handy unless you can memorise a map! Though it has to be said with the island being so small (about 1.5 x 2 miles) it's hard to get lost! Though the pier can seem a looong way away when it's near boat time and you are the wrong end of the island!

Having told you about all the information, it has to be said, there are no special "sites" on Graemsay. We have no Maes Howe, no Skara Brae, no standing stones. But we do have lovely views around the island of the Hoy Hills and Stromness. And a quiet gentle walk around a farming community, plus some lovely beaches with shells and cold-water coral! Just remember if you visit - there's no shop, pub, restaurant, or tea room!
Posted by Sian at 11:00