I was over in Stromness yesterday just for a fleeting shopping visit. On a Tuesday, Wednesday and a Friday it's possible to get the 10.45 ferry from Graemsay, which gets to Stromness at 11am, a quick run out to the Co-op and Flett's the Butcher and then back in time for the 12 noon ferry home. Though it can be a bit of a "trolley dash" around the Co-op sometimes!

Above is the view from the Stromness pier looking towards Graemsay. My home is to the right of the Hoy High lighthouse (did I mention I lived next to a lighthouse? Sorry - that's a joke from long ago when some friends from the US came up to see me living on a wee island and I had somehow forgotten to mention I lived right next door to a very tall pointy light-house!).

When I returned to Graemsay I found some farmers were shipping sheep. Fortunately there were folk on hand to help with the shopping as it was necessary to walk through the sheep in the pens. The new Church of Scotland Minister from Stromness was over for his first visit, and I'm sure it was a bit of a surprise to be met by a "flock" of a rather different sort! 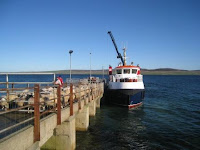 Later in the afternoon I decided I really needed to clean the outside of the windows after the recent gales - I couldn't even see through my kitchen window it was so covered in salt. I hasten to add this isn't salt spray from the waves but I am close to the shore so the air is laden with salt and the wind leaves it deposited on the outside of everything! 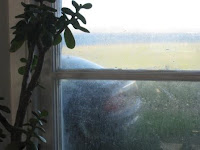 It was glorious to be outdoors, I could see for miles. Below are some of the wind turbines on the West Mainland but quite a few miles North of me. They stand out so clear when the sun shines upon them. 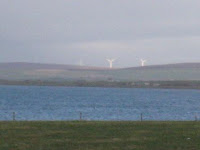 I also managed to catch the first "winter" sunset. Now the sun has moved round and is setting behind the Hoy Hills - a definite sign of winter. With the clocks going "back" on Sunday it's also dark now at 5pm. I have to say that *did* come as a surprise to me! It's been so mild (though windy) that I haven't really appreciated that Winter is here......(well OK technically autumn, but in Orkney it's either winter or summer and even then sometimes it's difficult to tell the difference between the two!) 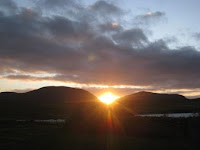