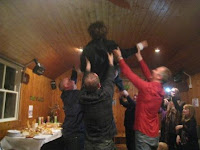 This time it was Andrew's 18th Birthday - as evidenced above he was given the "bumps" in true tradition of birthdays (His Dad, Uncle and brothers instigators of this I think). It was also his Grandma's birthday, I'll not reveal her age, suffice to say there were so many candles the cake caught fire - as evidenced in the picture below. 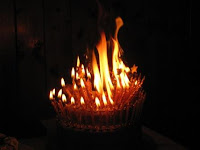 Oh - OK it wasn't really all the candles that caused it but they set fire to the sugar stars that adorned the cake - here is a picture of it before the conflagration! Beautiful isn't it?  It depicts Pat reclining on a luxury sofa doing her craft work.  The cake was made by Sandra of Hoy High, who makes great cakes! And it survived the fire due to some adept blowing out of candles by Grandma and family, but Bobby was on hand with the fire extinguisher and Sandra was clutching the Fire Blanket - just in case! 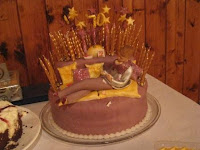 Here is the cake she designed for Andrew who loves playing his guitar! 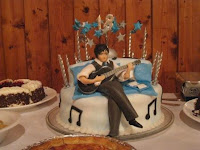 There was lots to eat for everyone and no, we didn't cut the cake. And yes I'm still in trauma that I didn't get ANY CAKE!  Well - to be fair there WAS other cake to eat and other goodies which the family had worked hard to prepare.

This was a family party for both Andrew and Pat (Grandma) rather than an "island party" but sometimes it's hard to tell the difference because, of course, everyone on the island is invited. Andrew and "Grandma" are part of one of the larger families on the island. When the "family photo" was taken it didn't leave many of us left in the hall, what with island family and their visitors (grand children and great-grandchild).

There was much dancing too! The famous Graemsay version of "Strip the Willow" - which gets more chaotic every year! 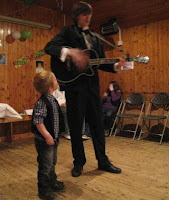 And then the brotherly duet 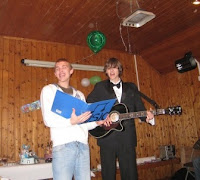 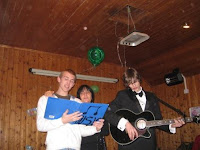 And when it all gets too much for a wee chap, there is always the chance for a nap.

I left about 1am, but I understand the party went on in the hall till about 4am and then adjourned home to continue till about 8am!  That's the way to celebrate!!