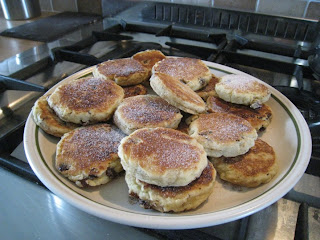 Today the house is filled with the smell of freshly baked Welsh Cakes and memories of childhood. I am connecting with my "inner baker" this winter and trying various cake recipes old and new.  For various reasons I haven't baked welsh cakes for over 20 years.  The old planc (Welsh for a cast iron baking stone) went rusty years ago and was discarded when I moved to Orkney. This week I bought a new one via Amazon for £15. Oooh my joy when it arrived! When Mick the postman delivered the package he said "I think there's a lump of metal in this" - without even opening it I knew what it was and shrieked "Oooh goody it's arrived!" - his opinion that I am bonkers deepened.

The preparation of a new planc is like a pagan ritual - wash in hot water, bake in the oven for 20 minutes, wash again, then rub in salt and butter and heat on the hob (hotplate) till it goes black, wash again in hot water, and leave to dry.  It still needs much more usage to make it a truly seasoned baking stone but after completing this yesterday I was ready this morning to start on the dough for the welsh cakes.

Most Welsh women will know how to make welsh cakes. The recipe I used was my mother's, an English woman, who learned to bake these iconic cakes from her mother-in-law in South Wales during the War (WWII). She lived with her In-laws while my dad was serving in the RAF.

Back to today - it was a wonderful feeling working the butter into the flour, the softness of the crumbs drew me back down the years. Adding the raisins, sugar, egg and just enough milk to make a soft dough, but not enough to make it sticky... I could hear my mothers voice telling me what to do.  I was pleased with my attempt and cut out the rounds, enough to make 20. I used to make batches of 50, but I was afraid I'd lost the skill so wanted to start small.

The tricky bit was baking them on the planc.  I'd only ever used a plan on an electric hob, so had to try and judge it right on a gas ring.  Three minutes each side, flipping over, moving them around the stone.  The first ones on the plate looked so inviting, but I resisted. I wouldn't eat one till all were done, sprinkled with sugar and then I would make a cup of tea and taste. 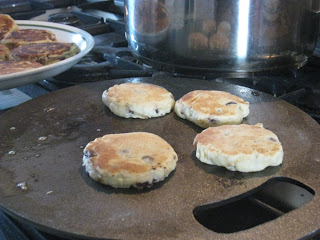 I was pleased with how they looked when ready - the test would be eating.  I'd cheated slightly - well adapted the recipe. Instead of using lard and margarine I'd used only butter.  Oooh I think that was an improvement and one that Mum and Granny would have approved of - in their day butter was a real luxury and not used for baking. The taste was worth waiting for. Buttery crumbly texture, juicy raisins, and the sweetness of the sugar all came through. These are best eaten warm from the stove - so I ate three!  Though they are OK eaten just at room temperature, and freeze well too. A little butter spread over them is allowed too....

Not a bad first experiment with my new planc......