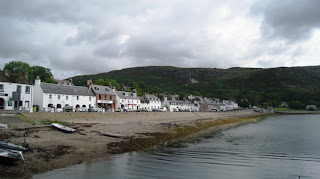 As promised, here are the first of some photos I took on holiday last week. A friend and I had a cottage in Rhue, just outside Ullapool on the West Coast of Scotland. It had a stunning view of Loch Broom, mountains, and the Summer Isles. Ullapool itself is a lovely fishing village. It was founded in 1788 by the British Fisheries Society as a herring port and was actually designed by Thomas Telford. In the 1980s the harbour was filled with Russian trawlers (known as the Klondikers) but now it is just the small local fleet that use the harbour. Ullapool also acts as the gateway to the Outer Hebrides with a ferry taking cars, cargo and passengers back and forth. Many visiting yachts are moored in the harbour too. So it's fairly busy with folk travelling to and fro the isles, as well as those wanting to walk among the hills and mountains around Ullapool itself.  Though we thought it was much quieter this year than when we visited two years ago. This was confirmed by some local business folk and retailers we spoke to. Whether it is the economic recession or the British weather that is putting folk off is unclear.  But we did our best to put money in the local coffers - particularly the coffee and cake establishments ;-) 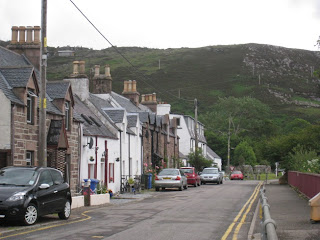 This is Sammy the seal (a grey seal) in the harbour ready to steal the bait from those fishing off the pier, or waiting for the boats to come in for a tasty morsel. The local children have named him Sammy - however apparently there has been a "Sammy the Seal" in the harbour for over 20 years - and Sammy has changed size, shape, colour, and even sex this year!  But whatever the seal - it's always called "Sammy" by the locals! 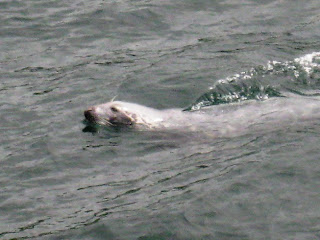 Here are the mountains I mentioned. I love wandering among the mountains (the bottom of them, not walking up them!). This is my favourite, known as Stac Pollaidh. I love it's knobbly spine - not unlike my own ;-) These photos were taken on the winding mountain road to Achiltebuie. 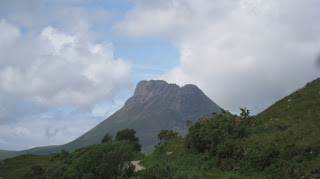 Not sure which this one is.... 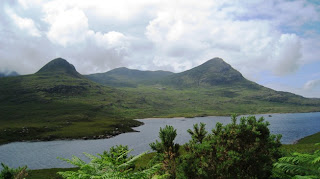 This is Suilven, another of my favourites. 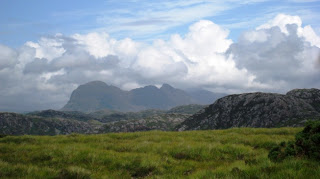 Hmmm not sure of this one either.... 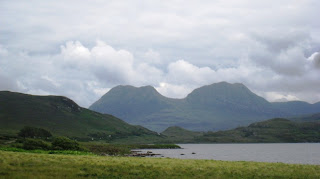 There was, of course, the opportunity for refreshment in Achiltebuie, then I sat reading while J. went off to explore on foot a while.  I was puzzling how the inhabitants would get to this particular cottage! (Summer Isles in the background). 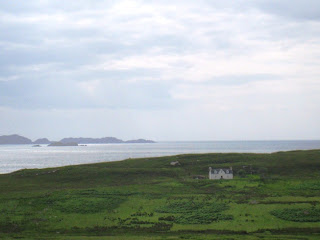 And then back to the cottage in time for a beautiful sunset..... More photos to follow later this week! 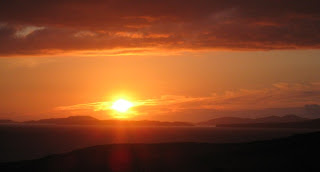