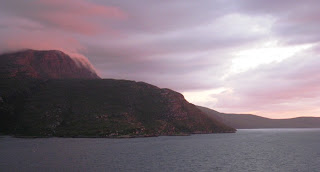 I promised you further pictures of the mountains and countryside around Ullapool and here they are! I can't believe I've been home nearly a week already. Time does fly...when you are working hard!

These photos were taken largely on a bus ride I took out to Lochinver. This is a scheduled bus route but it works well for a tourist like me too.  The journey takes about an hour on the bus from Ullapool along the main road, then you get an hour in the village (time for a cuppa, or a walk up the street), then back on the bus to Ullapool. It also gave me time to pop into a local shop and buy some fresh wild salmon caught in the loch that very morning. A much more delicate colour and taste than farmed salmon, which is what I usually eat. It was delicious baked in foil with a little butter and served with some new potatoes and sugar-snap peas!

Anyway back to the photos. The one at the top is of the mountain we looked out at from our cottage. The following photos were largely taken from the bus so not quite the best shots, but they give a flavour of the landscape.

I can assure you - this is NOT a volcano! Just an interesting volcano shaped cloud over this mountain!

In the distance, my favourite mountain, Stac Pollaidh 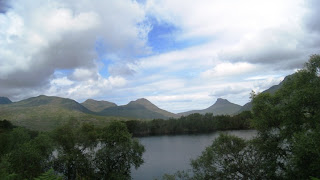 The mountains just rise out of the heather. 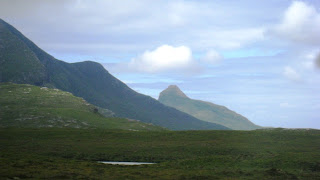 Farms and houses on the way to the village 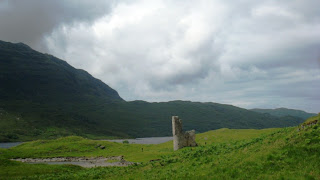 And here we are at the village of Lochinver, on the banks of the loch. 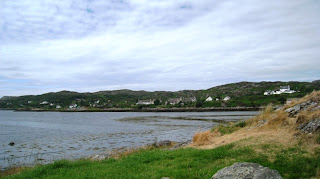 And on the way back a good view of Suilven 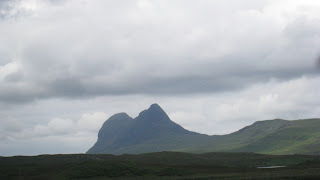 Once back in Ullapool it was time for a cafe latte in my favourite cafe in Ullapool - The Gallery Cafe. 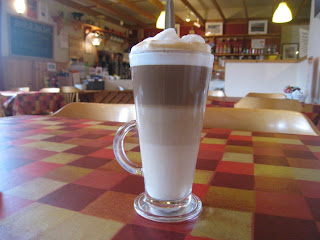 The cafe sells photos from one of Scotland's leading photographers, Angus Bruce. To see excellent pictures of the area take a look at his web site. The photo of the cairn terrier dog covered in Snow is his own wee dog that accompanies him up mountains and round lochs. Those little legs have covered some distance!