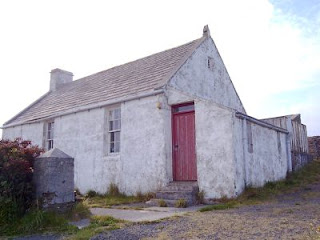 No....not for me but for the island school children!  There are two young boys who have started school for the first time this August. (The Scottish terms are different to the English school terms). The children  join three others from the island who go to the primary school and teenager J. who attends the secondary school in Stromness. All of whom go over on the ferry each day.

The ferry schedule is designed so that they have a fairly short journey time of 15 minutes on the boat each way. Though obviously there are times in the winter when the boat is cancelled. I'm sure many of them are praying for a stormy winter so they get more days off school!

There used to be a school on Graemsay - see the picture above. This was a one classroom school with cloakroom and toilet, and playground. It was a primary school (up to age 11), the children would go over to the Mainland for their secondary level education where they would stay during the week and come back to the island at the weekend.

Then in 1996 the island got a daily ferry service with the MV Graemsay. Previously the ferry had not run daily during the week.  So it was now possible for the school children to travel back and forth to Stromness each day.

With just one pupil remaining on the school roll and probably for economics and "inclusiveness" reasons,  the local education authority decided to close the school. Shops, schools and churches make small communities, and the island was very upset at the proposed closure. However, despite valiant efforts by the island folk to keep it open, the decision was made and the school closed.  Irene Mathieson was the teacher at the time having moved up here some years before from just outside Glasgow. She loved Graemsay so much she decided to stay and she and her husband Bobby still live on Graemsay.  Irene has lots of stories and many happy memories from her time as the island teacher.

As for the rest of Orkney - most of the isles have primary schools, and some secondary level education up to age 14. Then the children go to either Stromness or Kirkwall schools for the remaining time. Some of the children from the North isles still have to stay in a hostel during the week.  Again with a recession and falling school rolls small communities around the county are fighting to keep their schools. It's not an easy battle.

But for the Graemsay children, it's a daily "commute" to and from Stromness via boat. Which might seem a bit daunting (and in bad weather it IS!). Up to the age of 12 the children get a "minder" supplied by the council, who gets them on and off the boat and sits with them during the journey.  There are also a number of children from the neighbouring island of Hoy who are also going over to secondary school each day.  So the boat can be quite lively in term time!