.... to quote an old song. Finally we have a proper covering of snow on the island! The photo above is looking across to the Orkney Mainland with Black Craig now brightly lit as "White Craig"!

Last night the view from my bedroom window across the bay to the Hoy hills was just magical, lit up by the moon and stars in the sky, reflecting off the bright snow. No camera could capture the magic of that scene. The snow just seemed to glow, with the gentle dark waves lapping along the shore-line.

This morning I woke to more snow, probably only about an inch or inch and a half but wonderfully crunchy underfoot! I wandered about outside taking some photos but didn't go too far. Fragile bones and slippery surfaces aren't a good combination! 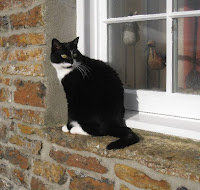 Button also came out to explore though, understandably, she objected to getting her paws too cold and surveyed my progress from the safety of the window ledge.

The hens were eager for their breakfast scraps this morning and were a little bewildered by the snow. This will be their first year of 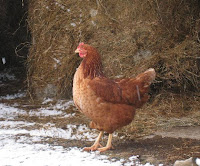 life so won't have seen snow before. But, although they seem to have little brains (just look at the size of their heads...) they certainly worked out where the barn was easily enough and went foraging among the silage bales put there for the young stock kept in the barn.

I do feel sorry for the sheep out in the field - they too get fed silage and other feed but look a bit disconsolate not being able to get to the grass. They have very thick warm fleeces so their bodies are nice and toasty, but I do wonder if I should get my friend D to knit them some socks.....? 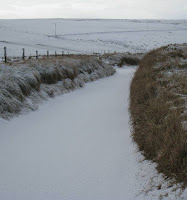 This is a picture of the "main road" on Graemsay this morning. I love the snow when it is fresh and crisp. But it will soon get churned up with the various vehicles going back and forth to feed livestock and to the pier. The Graemsay snow plough was out this morning - a tractor with snow plough one end, gritter t'other!

More snow looks as though it is on the way. That will please the kids on the island - I could hear voices and shrieks when I was out taking photographs so the kids must have been out with sledges making the most of the snow while it lasts!

Email ThisBlogThis!Share to TwitterShare to FacebookShare to Pinterest
Labels: photographs