Eight years ago, when the house was being renovated, the builders found a couple of items in the rafters of the house. Apparently the attic space, many years ago, had been a rudimentary bedroom for some of the children of the house. It therefore amused me to find that one of the "finds" was a cigarette packet! (The other side of the packet bears the name "Mitchell's Prize Crop Cigarettes" - and of course no health warning!) A painted metal button was also found, presumably from a cardigan, or jacket.

Sandside has quite a history - around 1830 Henry and Betsy Sutherland

moved to Graemsay from Walls on Hoy. Henry was a tenant farmer, the island of Graemsay being owned by the local "laird". The couple had ten children, and at the time lived in the house which is now a byre. Two of the sons took over the farm at some point. Alexander and Samuel ran the farm for some years, and it was at that time that the laird built the current house (around 1860). The style was unusual for Orkney, more fitting to a large town, as it was an early "maisonnette" complete with external staircase. Sadly the external staircase was lost around 1910. Other changes were made to the house about then, converting it into one home as it is today.

While the house was split into two "flats" Alexander and his wife Margaret lived in one part of the house and Samuel and his wife Mary lived in the other part. Over the years Alexander & Margaret had ten surviving children and Samuel and Mary had twelve children, including a set of twins. And no the house isn't that big! I have no idea where they all lived, although maybe the older ones were away from home by the time the youngest were born?!

In fact the entire Sutherland family of that time equates to the current island population! Though in the late 1800s the Graemsay island population was about 200, with families living in small croft houses, most of which are derelict now. Currently there are 14 habitable properties on the island. How times change!

At some point there was a parting of the ways and Samuel and Mary took over the house and the farm themselves. Alexander and his family moving to Orphir. The descendants of the Sutherland family are spread far and wide across the globe, as well as several living in Orkney. In the summer months each year I hear a knock at the door, and it's a descendant of Samuel and Mary. I love placing the visitors on the family tree. I know more about the Sutherland family history than I do of my own! Bryce Wilson, who used to be the Custodian of the Orkney Museum, and is a descendant of the Sutherland family, has provided me with a copy of the family tree and various photos over the years. And occasionally other members of the family provide information or photos. (Photo left has Samuel and Mary centre, surrounded by their children, taken circa 1905. Full list of folk in the photo from left to right: Standing: Catherine, Samuel Agnes, James, Hughina, Daniel, Henrietta. Sitting: Isabella Ann, Samuel, Mary (nee Lyon), Mary. Front: Clara, Betsy, Jane-Anne.

Daniel (John Daniel) took over the running of the farm after his father's death. John Daniel and his family remained living at Sandside, till Daniel died in 1951. I think the family left for "south" after that period. The house was then let to Jock and Gertie Seatter who stayed in the house till 1985. After that the house was left empty until work started on our renovations. 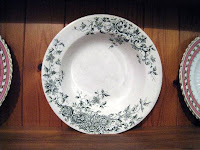 I was fortunate enough to be given a plate from the dinner service which was a wedding present to Sam and his wife Mary in 1877 and this now has pride of place on the dresser in the kitchen. I like to think it has come home again!
Posted by Sian at 10:00