I enjoyed an excellent Spring Equinox party in Orphir (Orkney Mainland) last night. Our hosts, M&R did a great job and made everyone welcome - even providing S'mores (more of that later!). And the fire was magnificent. This picture is of the fire just getting going.

The weather also put on a stunning evening for us. Once the roar of the fire died down you could hear geese, oystercatchers and lapwings calling. The Hoy High lighthouse on Graemsay shone like a beacon, with the light reflecting across the still water to the shore. It was interesting seeing Graemsay from a different angle! At the start of the evening the lights of Stromness were twinkling - we were remarking just big the town looked with lights stretching along the line of the harbour and up the hill. However slowly and silently the mist stole in and hid Graemsay and Stromness from us. All that could be seen of the town was a shimmering light following along Brinkies Brae at the top of the town. 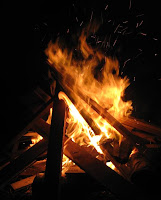 Although there isn't that much light pollution from Stromness, the dimming of the lights did enable us to get a spectacular view of the night sky. I used to love standing in my garden in Kent looking up at the stars, but the view is nothing in comparison with Orkney. There are just layer upon layer of stars. First the largest and brightest begin shining in the sky, then as your eyes get accustomed to looking at them you can pick out tiny pinpoints of light between the brighter stars, and eventually the whole night sky seems to be a glitter. Last night we could make out Orion, the Plough, Saturn and many others I can't name! Just magical.

The party was held on the shore near M&R's house (which is just across the Flow from Graemsay - OK they will say I am just across the flow from Orphir.... depends on your perspective). Anyway, it was possible to walk down to water's edge as the waves gently lapped the shore. Some of the kids came down with us, they were sensible and had rubber boots on so they could jump around in the shallows. Meanwhile I kept my feet firmly on dry land!

Baked tatties (jacket potatoes) were being cooked in the embers of the fire, and sausages were 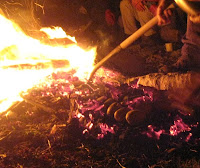 cooked on improvised skewers. And the best bit after consuming the savories was dessert - S'mores. For the uninitiated these are chocolate biscuits with marshmallows on top, the mashmalows first having been toasted on the open fire. The soft warmth of the mashmallows slowly melts the chocolate on the biscuit. I can only eat three in one go. Which is probably just as well as others were keen to eat them too. I was very magnanimous and even helped a wee boy, Hamish, toast some marshmallows AND let him eat them himself. Though someone did discover I was hogging the packet of biscuits and marshmallows..... damn, thought the darnkess was hiding my gluttony!

So it was a great night and a wonderful way to herald a new Spring! 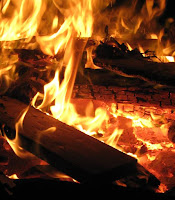