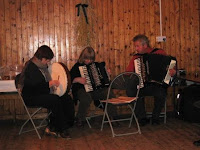 Friday night was the island "Harvest Home". This is an evening  celebration of the end of the harvest period. All the parishes in Orkney hold them about the beginning of November to celebrate having brought in all the crops, tatties, neaps, and safely delivered livestock.

The tradition is a meal, with music and dancing to follow.  The ladies on the island did a great job of providing the meal with plenty for everyone including the traditional "clapshot" which is mashed tatties (potatoes) and neaps (swede) and happens to be my favourite.....!  John Budge of Longhope gave an impromptu speech at the end of the meal while we had our coffee (it's traditional to have a "speaker" at such an event). We also had home-made shortbread and a new delicacy of shortbread with caramel, and white chocolate...... it was wonderful and I managed to bring a doggy-bag home of some too!

After the meal the tables were cleared and the musicians began.  We were really  fortunate to have Fran Gray and John and Leslye Budge from Longhope.  Fran and John played on accordions accompanied by Leslye on the bodhran (see photo above).  John also sang a selection of songs, some traditional Orkney songs like "Kirkwall Bay" and "Lonely Scapa Flow", as well as traditional Scottish songs and some country music type songs which we all joined in.  There was also some traditional dancing with the "Strip the Willow" going on for some time and getting faster towards the end.  I feared the "First Responders" might be required by the time the dancers finished!!

The party went on into the wee small hours but I headed home about 2am.  Though rumour has it the party actually carried on until about 9 a.m.!

Anyway it was a great night and we're all very grateful to Fran, John & Leslye for coming over and providing such entertainment!  Now.... I need to work out how to get more of those biscuits......
Posted by Sian at 17:33