We're not having as bad a time as other parts of the UK (yet), but we have snow and the occasional blizzard! I went out this morning to feed the hens and they were still roosting - the snow on the roof made the hen house dark and they thought it was night time!  They were surprised to see me with breakfast......  However I have kept them shut in for the day as there are some young birds there and I'm not convinced they understand it's better to stay indoors during a blizzard!  Charlie the barn cat was glad to have breakfast, but at least he has a lovely warm hay barn to sleep and hunt in.  I gave him "extra rations" but I suspect he's probably getting plenty of food from the mice moving out of the field into the barn! The garden birds were glad of more fat balls, seeds and peanuts, and with the hens shut in I was able to leave food on the ground for the blackbirds - though of course the sparrows and starlings were just as happy to eat it.

I was due to go over to Stromness last night as various galleries were having openings of their Christmas exhibitions. However after phoning the ferry skipper's wife to book the boat she advised me the wind was due to get up and snow to come in so I cancelled. Just as well as we have enough snow to make driving difficult and slippery!

So I'm snug indoors with a slightly grumpy Button (a bored cat is an annoying cat!) and am just watching the weather pass over. I have lots of work to be do so I'll just get my head down and get on with it and await the thaw! 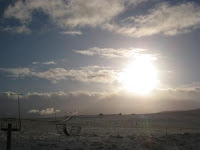 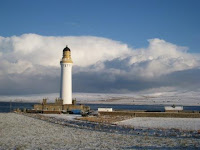 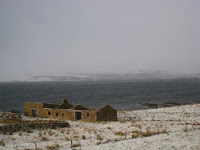