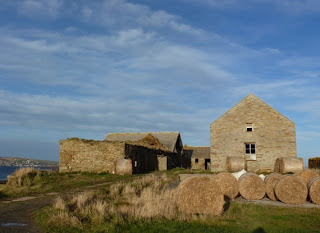 Next door to my house is what is called the "steading" - barns and byres.  These were once part of the main farm at Sandside. A neighbour, who owns the surrounding farmland, also owns these buildings but my hens use them too! And I can store my tractor/mower in there out of the wind and rain too.

The tradition in Orkney (and I'm sure other rural areas) is to re-use buildings. Above you can see a "close" of buildings. The one at the far end, used to be the main "house" before my home was built.  The Sutherland family brought up some of their many children in this long low building.

But even before that, another house was inhabited. But at some point this was abandoned in favour of the "new" building next to it, and it became a byre, with cattle stalls and hay racks still clearly in evidence. But you can see where the lum (chimney) used to be! The kye (cattle) would have been chained up in here in the winter months and fed hay in the racks, with water in troughs below. 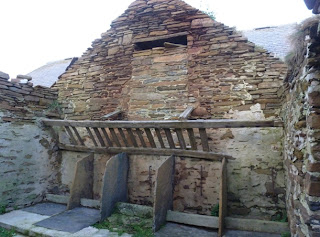 These buildings have been changed and altered over the years. If you study the stonework you can see where the alterations have taken place. Each generation re-using the buildings as needed. Raising the roof on some (as on the barn on the right in the photo at the top of this post), and turning former homes into byres for the livestock while the family moved to a "new" house. A gully has been put into the floor of this one to deal with the - er - liquid from the cows tethered here. 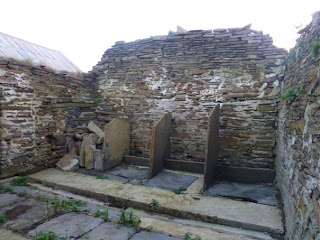 Mostly these buildings are used for storage for hay and machinery now.  But I love looking at the history within their stone walls and imagining the busy farm, full of "beasts" in the winter months, with the family nearby. Children running around among it all, helping on the farm, and walking to the school on the hill each day. And of course walking over to the Kirk on a Sunday too!