Just over a week ago I acquired two new hens.  They are Maran crossed with a Jersey Giant cockerel (I know he sounds like an American Baseball player or similar!).  Anyway a neighbour had a surplus of hens and I wanted to increase the flock with some young birds.  I was down to 7 hens due to some recent loses and the youngest was 6 years old (oldest about 10). Egg production had understandably dropped due to the age of the hens.  I don't need many eggs but it's nice to have a few a week.  I knew the two that were intermittently laying would stop over Winter so now seemed a good time to get some young stock.

So I welcomed these two new hens, but what to name then.  Well they have black feathers with a beautiful greenish tinge, and bright red combs.  They were not unlike my Shetland Black cross that I had named Tallulah as she looked like a showgirl in a 1920s/30s speakeasy in Chicago, so I decided on similar names - hence Dolores and Lola!  Now I have THREE showgirls! 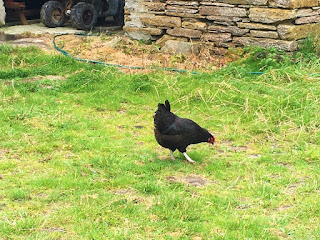 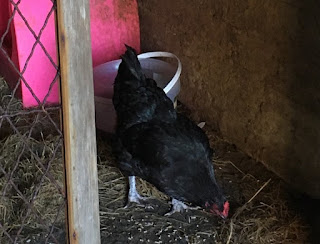 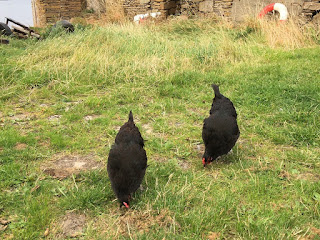 When they first arrived it was early evening and I didn't want to put them in with the other hens immediately so they went to the henitentiary.  They settled in well and started mixing early on with the other hens.  There is much truth in the term "pecking order" and these girls are in no doubt they are at the bottom! 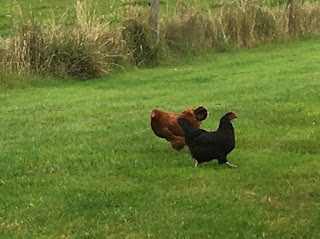 Each night though the new girls went back to their roost in the pen.  And each night at dusk I would gently carry them into the hen house and put them onto perches.  This went on for over a week but after the poor weather on Saturday they seemed to decide for themselves that roosting in the henny house was cosier with the other hens (it's more sheltered!). So hopefully things progress well now with the flock.  One of the new girls is already laying daily! 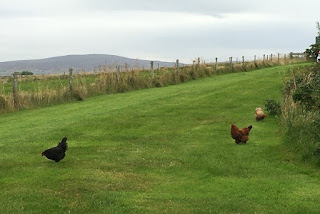