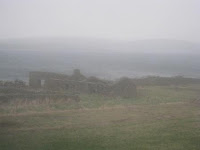 To be honest I'm not THAT remote from shops and services that I need to do much in the way of preparation. They are only a short ferry ride away, on the horizon of the photo above. However on days like today when the wind is high and from a direction that makes it hard for the boat to dock at our pier, there are cancellations. Plus I don't want to have to go out unless I really have to some days, especially when it's hard to stand up!  So I've been stocking up the freezer with some essentials, including milk of course. I'm afraid I've never been a fan of long-life milk, so in preference I get ordinary semi-skimmed milk and freeze it! It freezes OK, separates a bit sometimes, but I still prefer it to the long life variety!

Then I need a goodly supply of porridge. My daily breakfast is a warming bowl of sloshy porridge with some blueberries. (Also time to start freezing some (shop bought) blueberries!). 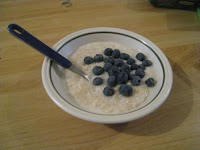 Of course I need to ensure a good supply of CAKE. Very essential ;-)  I'm doing more baking now, and also enjoy a delicious cake with coffee when out in town. This photo was taken at Judith Glue's cafe last week.  The vanilla cup cake was delicious! 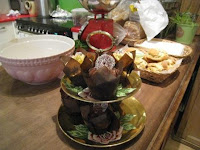 And I have to make sure the sweetie (candy) drawer is full. 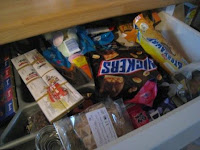 I have a nice stock of broad beans, and some gooseberries in the freezer from the garden, and tatties (potatoes) ready to be used. But other fruit and veg needs to be ordered from town. Sometimes I just make up a big pot of veggie soup and freeze it, then have that with a chunk of home (bread machine) baked bread, so I get some of my "five a day fruit and veg" that way!

And there are lists of everything that I need to do when I go to town, as now I only go to Stromness or Kirkwall every 10 days or so. In the summer there are more events on, or it's nice to go over for a coffee, meet up with friends, or go for a walk on the Mainland. But winter is a time of snuggling cosily indoors - well for me anyway! Of course Graemsay is a farming island and so most of my neighbours HAVE to go outdoors to see to livestock etc.... It's hard labour struggling with large barn doors, and ensuring the tractor door doesn't get torn off in the wind. 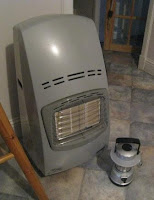 Our power supply is fairly constant, and the power company is pretty quick at repairing faults. But I still keep torches handy in each room, plus rechargable lanterns at the ready. A calor gas heater can keep at least one room warm for a while should a power cut stop the heating working. And I have gas burners on the cooker so can still cook and heat water for drinks etc.  But generally as power cuts are short (fingers crossed they stay that way) I normally just use a rechargeable lantern, make a cup of tea and once it's dark go to bed with the battery operated radio. Though bearing in mind it gets dark early in winter - that means some very early nights!

Of course now we have mobile phone technology, the landline telephone going off isn't such a catastrophe, though it is an inconvenience. Broadband is more of a problem if it goes off, but I have a backup mobile broadband "dongle" that I can use for emergencies. Essential as I work from home and need to access emails and databases etc.

I had more insulation put into the loft this summer as part of a Scottish Government Scheme energy saving scheme. So hopefully that will help retain the heat. I have underfloor heating downstairs which acts as a huge storage heater. But upstairs it's radiators in the rooms, so the temperature drops more quickly once the heating goes off. Hopefully the insulation will prolong the heat! And of course I have to remind myself to close doors behind me. In summer I leave all internal doors open and drift around the house. But to be economical with heat, I only heat the rooms I use, and must remember to try and retain the heat in those rooms!  The underfloor heating works through an oil fired boiler. With oil prices as high as they are - I'm wondering about converting it to burning £5 notes - it might be cheaper....sigh.....  but energy - that's a whole other discussion!

Button doesn't like windy days - no good for catching mice! So most of the time she sleeps.....sigh.... oh to be a well-cared-for cat in winter...

But this is just as well because the cat flap has to be blocked off during the gales because otherwise, even when locked, it is draughty and I fear it will get blown out by the force of the wind!  On Graemsay no one has a letter box in their door either - way too draughty and water would pour in! 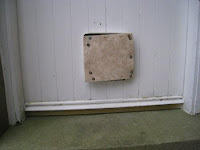 Transport note: - our ferry has been able to come to Graemsay during the day today but has one cancellation this evening. However due to the wind direction it's had to cancel more sailings to the neighbouring island of Hoy as it's been unable to dock at the pier there. Other islands in Orkney have had delays or cancellations too.  And the Churchill Barriers have been closed to traffic, cutting off the linked south isles from the Mainland, as well as cutting off traffic arriving in Orkney on one of the routes from Scotland! But it's hoped once the tide drops the barriers themselves will be open. Living in an island community you just need to be a little flexible, and have some contingency plans in place! It's also been announced that the Shetland-Orkney-Aberdeen ferry has had to be diverted to Rosyth as Aberdeen harbour is closed due to the high Easterly winds! Glad I wasn't on THAT boat!  Ah yes - Winter is here....
Posted by Sian at 13:03