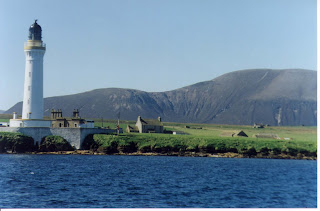 So there I was in the Winter of 2001 at the eastern end of the island of Hoy, just outside the village of Longhope.  I remember a lot of snow which made travelling anywhere "interesting". I did get cut off for a few days but I'd already learned to stock up on supplies of food and heating oil. So I was quite cosy. It was my first winter in Orkney. I was learning about the constant wind...and the long dark nights. With the light fading by 3pm, and not rising till 9am there was a lot of dark about! I'd lie in bed counting lighthouses - I think I could count six, with several being on Mainland Scotland. I had a stunning view of the Pentland Firth, but I prefer my view from Sandside - there is always something happening with a variety of boats passing Graemsay.  On the Pentland Firth I mostly watched the Scrabster to Stromness boat (then the St Ola) sailing past in the distance.

I felt quite "low" that winter. I was getting used to an Orkney winter, not working and trying not to spend money from savings, as any £1 spent was £1 less for the house. I was job hunting locally to supplement my income, without much success.  It is a delicate balance in a community such as Orkney, indeed in any rural community.  "Incomers" can affect the availability of work and housing. I was sensitive to this as my father's family are from Wales and in the 1960's and 70s the Welsh Nationalists were very anti those buying up property dirt cheap for holiday cottages. But I felt that we were also putting something into the local economy, what with the house purchase, using local builders and largely local supplies for the house, and of course buying locally for food and other services.  I had been self-employed for many years doing a variety of things from consultancy work, to training, and business research and felt I had a variety of "tranferable skills" and was really looking for a local job for a while.

Job hunting was the fairly depressing process it often is and so I remained out of work for a few months.  It did give me time to get on with the battles with Historic Scotland (a department of the Scottish government charged with looking after "historic buildings") over the plans for the house. J. was working overseas at the time so it was down to me to attend meetings and deal with officials. Our local surveyor and agent, Stevie Omand, was brilliant at helping me navigate the mysteries of the system.  The challenge was that the house was "listed" as being of architectural "merit" - it was originally built around 1860 as two "flats" with an external staircase. 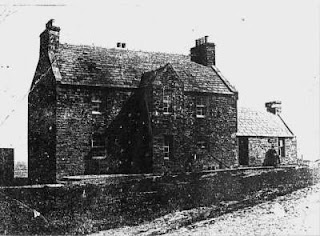 Sadly the staircase was demolished around 1912 when the house was then converted from two "homes" into one. This is a photo of the house just after it was converted. (Not sure why the Shetland Museum had a copy but they did!). 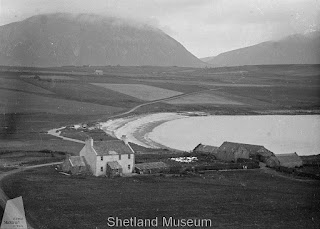 There is a whole other story about Sandside itself which I plan to tell later. The Sutherland family were tenant farmers here for many years and their lives and Sandside's are intertwined for generations.  This is a photo of Henry Sutherland and his family, and somehow they all fitted into Sandside which actually isn't THAT big! 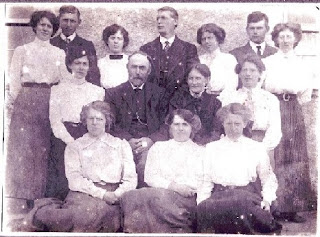 Now the house, walled garden and the small building used as a post office were "listed" by Historic Scotland, which meant we were restricted on what we could do with them. No money to HELP but just restricted.  Historic Scotland (well the architect from Edinburgh) didn't like our plans for the extension which was crucial if we were to run some sort of business from the house. OUR plans were to build the extension, adding onto what were the old dairy and cowsheds and have it all in keeping with the remainder of the house. Now, such are the ways of conservation architecture - we could knock down the outbuildings and put up a modern structure in glass and metal if we wanted, do anything it seemed EXCEPT have something "in keeping"! We LIKED these outbuildings and wanted to keep them...... 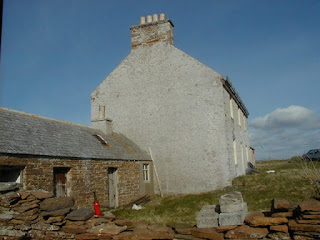 The local planning committee at the Council had passed our plans. They were delighted that an old uninhabited house on one of the isles was going to be a home again. They saw NO problem with our plans!!  Historic Scotland (I renamed them Hysterical Scotland) on the other hand were being difficult.  After several meetings between Stevie Omand, myself and the Historic Scotland architect we did eventually reach agreement. It came out of the blue which was lovely but I'd been pretty stressed out with it all and couldn't really believe we'd been given the go-ahead!! So finally we could get the builders back in!!

About this time I finally got a job in Kirkwall at the local authority (local "council"). It was meant to be a temporary job but went on for over four years!  (I left in 2005 to work full time from home as a health researcher for the Medical Research Council in Glasgow. So then I could feel happier because I wasn't taking a job from someone local. And my income would be from outside Orkney but spent in Orkney so I really was contributing to the local economy again.) Though I have to say even now folk often still think I work at "the Council"!

During the difficult winter of 2001 I was buoyed up by support from the folk on Graemsay who would invite me into their homes whenever I was on the island and meet up in Kirkwall etc.  And the folk on Hoy who befriended me and showed me around. And in my mind I held onto my first image of Graemsay - the one at the top of this post taken on our first visit to the island as we were leaving. That was the dream and it WOULD come true, but it would just take time, perseverance and patience. Um.... did I tell you I'm not very good at being patient?? "Why wait?" is my motto!

In the next post I'll tell you a little about the renovation of the interior of the house.
Posted by Sian at 21:26