May 1999.....oooh somehow it seems ages ago and sometimes it's just like yesterday. But that was when I first came to Orkney and saw Graemsay and Sandside!  A friend and I were looking for a home away from the rat race of the South East of England, where we could perhaps build a business to pay living expenses.

That's why one day in May 1999 we headed for one of the London airports on our journey North.  A work colleague had bought a property on the neighbouring island of Hoy. We'd seen the house details for Sandside among a pile he'd discarded.  We were in Orkney just for the weekend, staying in Stromness and visiting a number of properties on the Orkney Mainland.  I was struggling with the idea of living on an island and frankly Orkney Mainland was just about as small as I thought I could manage.

We visited smart modern new houses, some with a small business attached. We visited complete ruins with land but no services (water, electricity).  Nothing really grabbed us.  Our criteria were fairly broad - it had to be a property with "potential" to extend, develop, run a business from. I wanted to be able to walk easily to the sea-shore (well no point in living so close to the sea if I couldn't do THAT!). And away from any busy roads (yes there are some even in Orkney).

The weather was glorious that weekend. The sun shone, the sea was turquoise. Not a breath of wind. Orkney looked stunning, wearing her best Spring clothes.  Still I was uncertain. I fancied an "adventure" but did I really want an ISLAND adventure?

On our final day we had booked an appointment to visit Graemsay and see Sandside. The wee Graemsay ferry took us first to Hoy and then to Graemsay.  Blimey - it's a wee island!!  I'd said to myself, in a slightly fey way, if I see a seal I'll now this is "meant to be".  Not a single one did we see.... in fact I hadn't seen one all weekend.....

Our first view of Sandside made my heart sink.... it hadn't been lived in for 15 years and the windows had holes in where the pigeons had flown through, and there was a board along to roof to stop the slates falling down and harming anyone. (The post office was still run out of a small building to the side of the house - see the red door?). 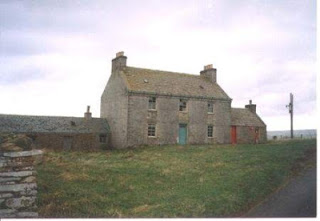 We wandered around inside and I just couldn't visualise it as a home. J. was much better at that, coming up with ideas and plans.  I was still a bit unenthusiastic - if you ripped out the inside of a house, did it still retain it's heart?  We stood outside in the sunshine with Arthur Ritch (who was selling the property) and talked about practicalities - how often did the ferry run, what was it like in winter.... (Um.... did I mention this was my FIRST visit to Orkney?).  I remember cutting through the conversation, like a bored child, and asking him "Are there any seals round here?"  He smiled and nodded to the beach "Ah you mean those things?" and there along the shore were seals, just a few dozen yards from the house on the sandy beach. I don't think I stopped smiling for the rest of the visit. 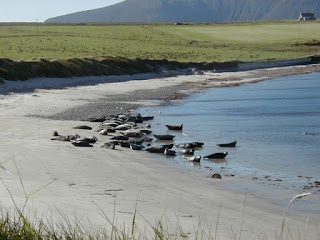 We went up to Arthur's farm, Fillets, and met his wife Cathy. Over tea and homebakes we chatted about animals, gardening, Graemsay and all sorts. All too soon it was time to head to the ferry, so Arthur gave us a quick tour of the island - well no tour of the island takes long! By the time we were getting on the ferry we had "bought" the house with a handshake.  Obviously legally there was a bit more to it than that, but we'd bought the house and the field behind it. A field which leads down to a BEACH!

On the flight home I knew I'd made a good decision.... it would be an adventure but also the right thing to do.  Sadly for J. he decided his heart was not in Orkney and has remained in London. So now Sandside is all mine and each morning I wake up with this view (um....Button has to get in every photo!).

And the house now looks a little more respectable!! I'll tell you more about the story of Sandside in another post shortly! 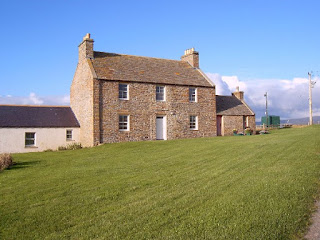