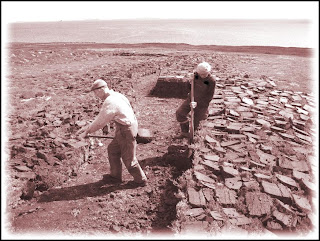 Here is more from Derek Mayes on the fascinating topic of peat cutting....:

"I think I should walk you through a few things before writing more about cutting.
Peat is compressed vegetation. Years and years of annual growth, living and dying, usually in wet ground. So not heather but mosses and the like. Peat usually accumulates slowly, at the rate of about a half to one millimetre per year –  well over a thousand years a metre – very slowly then! Some of  the moorlands here have over three metres of peat.
The deeper it is in the bed, the more compressed it is. Prehistoric peat eventually becomes coal, which is usually hundreds of feet, sometimes thousands of feet under rock layers – but then everyone knows what a coal mine is.

Peat is not, generally, being formed today, largely because the climate is not suitable. But in some places, mosses are dying, being overlaid and sinking into wet beds.
Today, moorland peat is overlain by shrubby heather. Removing the heather, extracting the peat and exposing the rocky ground almost always leads to environmental or habitat problems. But it also leaves a legacy of unsightly, crumbling and overhanging banks, often at the foot of which are stagnant pools of moss-rich water – in themselves good habitat for small invertebrates which, in turn, may support a higher level of life, like birds and small mammals.

Inside an old Orkney House. The people were sooty and well cured. 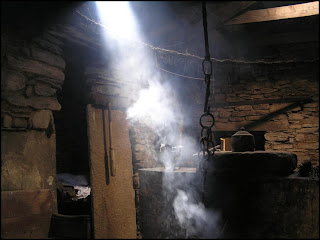 Peat cutting used to be a community affair. The landowners would often pay (not much) for the labour and allow some peat to be kept by the householders and tenants. It was common for whole families to cut peat, with ponies, traps and laughter at the peat-heads. But the good peat was usually sold at market, the rough stuff kept for home use. Peat was exported from Orkney and from island to island – some had nowhere near enough, others more than sufficient.

Peat is nowadays often extracted mechanically. Huge special machines can now lift peat from the ground without apparently disturbing the surface but in some cases, like on the distillery-owned headland near here, JCB style diggers are used. Almost everywhere it is now accepted that peat extraction should be done in such a way as to not damage the environment. That of course, is impossible.

Peat cut mechanically (big JCB) is usually removed down to the base rock or glacial drift. This is whole landscape destruction. Orkney 2010. 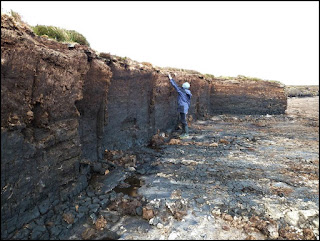 There are few people still extracting peat by hand – it is quite hard work, walking in, cutting, stacking, turning, drying, carting and managing. But some people do. Hand cutting is fair for the environment (only fair).

One might expect that those who do cut, to understand the ways of the moor or headland – I do. I know the birds, the insects, the plants and can name most of them; and I understand the balance of the habitat. I still worry that I am taking, and burning something that belongs to us all. I take peat only from old beds, taking pride in repairing the damage done by years of careless or greedy extraction.  And I take care to repair as I go, to remove only that which is required and I will always do it by hand.  It is the best I can do – we like the peat, Dot and I, we like the moorland more. 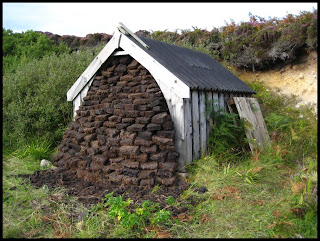 Most peat is stacked and dried outdoors. We store ours indoors – in a byre. It is not easy to carry into there, through the door, round the corner, having wheel-barrowed it from the headland. But it is all therapeutic, a joy to cut, helps fitness and makes us hungry.
The very nicest thing about peat is the glow of warmth expelled into the room on those dark, wintry nights and oh yes, the aroma outside on the breezes, an evocative perfume.

My next entry will explain how I cut and stook; and how we, Dot and I, turn the slabs through the weeks of summer, barrow it home and stack it neatly in the byre.
Derek"

Feel free to ask questions or add comments - Derek will respond to them (he's answered some of the questions asked about his previous post).