The next stage of the story.... 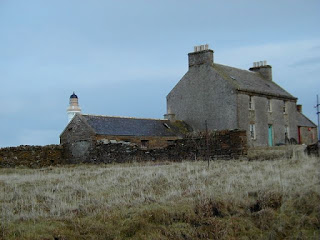 So there we were, in 1999, at the dawn of the new millennium with a house we couldn't live in, in a land I knew nothing about!  I wasn't able to visit the island again until the December. J. and I decided to spend Christmas and New Year (the Millennium New Year) on the island in rented accommodation down at the lighthouse.  It was lovely to walk around Sandside and imagine living in it and what we would do with the spaces etc. Folk on the island were very welcoming and we were getting to know all our neighbours at the many Christmas parties on the island. But it was also a VERY cold Christmas and New Year with snow thick on the ground (unusual for Orkney). We were undaunted and set about getting plans drawn up for the renovations.......

The first phase was to make the house wind and watertight, which meant taking the entire roof off, taking back part of the chimney on one side, and replacing all the "couples" (the wooden beams that hold up the roof slates), then getting the Caithness stone slates back on as well as replacing the external doors and windows.  At the end of this phase the house looked like this. 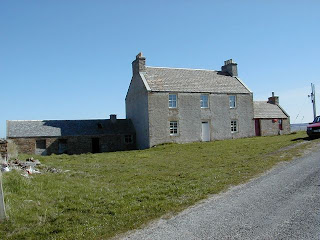 But first it went through this...... and yes that was scary! I was convinced the two chimneys would fall in and the entire house collapse. (Did I mention I was a drama queen? Hee Hee). 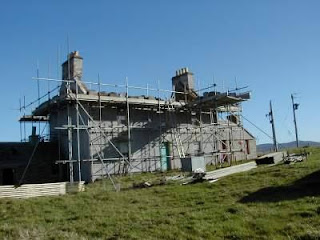 Meanwhile I was living in a caravan in the old walled garden next to the house. I'd moved up to the island in the June of 2000, having rented out my flat in Kent. I was keeping my options open - if things didn't work out I still had my flat to go back to.

That summer was magical. The weather was warm - I even wore SHORTS! The days were long. I can remember the joy of lying in bed at night and hearing the curlews, lapwings and oyster-catchers calling and the waves on the shore just yards from my bed.  The haunting sound of the seals was new to me - I got up one night, dressed and followed the noise as at first I thought it was a dog stuck somewhere!  Then I realised it was the seals along the shore calling. I can understand how sailors would have mistaken them for mermaids, and the legend of the Selkie grew up. Their call is ethereal and beautiful. For the first time in years I felt an inner calm.

I had the first of my friends visiting and got to know much of the Orkney Mainland. All the tourist sights and some of the quieter places too. Like Rackwick on Hoy, a beautiful wild place. 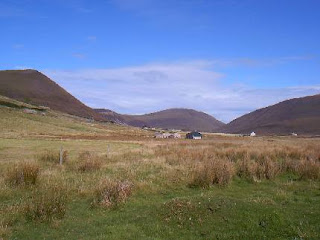 Cathy Ritch, from Fillets, also tethered her "hand-milker" cow in the garden as "Tiger Lily", as I called her ( she had black stripes on her hide), was needing some lush grass prior to calving.  Tiger Lily was very docile and I would stand in the evening sun scratching her head and neck. 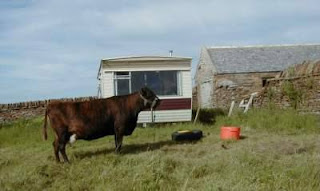 One day I looked out the window and realised that in a heavy rainshower Tiger Lily was starting to calve. Now, years ago I used to work in a farming community, working for an auctioneers at a livestock market in Kent. So I knew a tiny bit about farm animals. I wasn't a complete "townie".  So I phoned the farm, Cathy was away so I told Arthur.  In the meantime the cow calved quite happily.  Arthur arrived with a trailer too late to take her "home" to calve.  I asked him what had taken him so long - I'd stood there in the rain fretting the calf was getting cold!!  He said I hadn't *quite* explained that the calf was calving NOW. Personally I think he didn't believe a townie could tell when a cow was calving ;-) 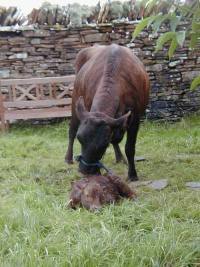 This all sounds quite idyllic, and it was. But in the background there was my concern about keeping working (I'd brought some work with me, but it wouldn't sustain me for long) and also quite how long I could live in the caravan into the winter.  The answer to the latter came in the mid-winter when there were warnings of storm force winds.... Arthur put silage bales around the caravan to protect it (the garden walls gave some protection), and neighbours said I could go and stay with them if necessary.  I thought I could brazen it out, but as crockery fell off the shelves and the walls of the caravan flexed, my then cat, Fitzi and I huddled under the duvet.  I decided I couldn't deal with that for the entire night so with the cat under one arm, his litter tray in a bag, and torch clutched firmly we set off to Fillets for the respite of the spare room.  I think they were a little startled to see me arrive with the cat!!  Well I couldn't leave poor town-bred Fitzi-cat in the caravan on his own!  We were both very glad of solid walls that night!

Fortunately a friend from South had a holiday cottage on the island of Hoy that was empty for the winter. So Fitzi-cat and I decamped there for a few months. The only proviso was I had to foster another cat. I think her proper name was Vodka (don't ask), but I called her Mischief or Baggins, because she was. Poor Fitzi had a horrible 6 months, with Baggins hiding behind doors, or ambushing him from the sofa. They did not get on.

The view from this cottage was wonderful, but we had yet another deep snowy winter. That's when I first met John & Leslye Budge (the musicians who come and play at our harvest home party). John came with his tractor to dig me out as there were large drifts in the driveway. 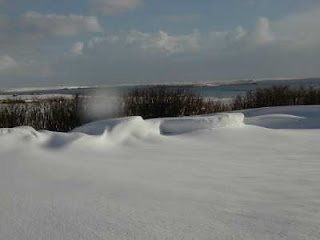 The snow was well up over the cat.... 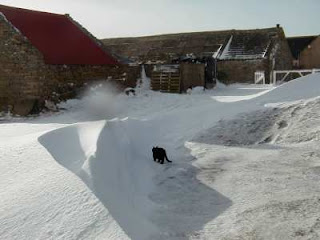 At the weekend I'd come back to Graemsay with Fitzi who was doing his best to be as adventurous as a former house-cat could be.  You can imagine my alarm when I saw him on the roof of the outbuildings!!  And yes of course he slid off....sigh... fortunately onto very soft mossy grass.  He wasn't the brightest of cats but was a gentle giant and I loved him dearly. 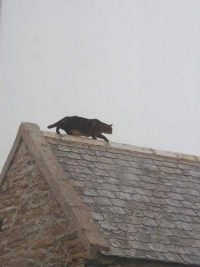 There was a brief hiatus in the work on the interior of the building as the builder firm was busy and couldn't start for a few months.  Meanwhile I knew I had to sell my flat south in order for me to finance the next phase. That winter was a scary one for me. I was finally cutting all ties with my life south. Yes I was really excited about my new life on Graemsay, but currently had no house to live in and no permanent work.  I couldn't imagine going back to live "south" - everything pulled me to Graemsay. I just had to find a way to make it all work....... (there, I'll leave a cliff-hanger like any good novel!! Hee hee!! More soon).