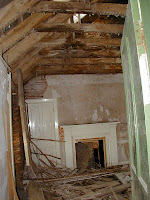 So continuing the story.... above is what is now my bedroom.  It was one of those "Oh my gawd" moments! I've never been involved in a renovation before so I was often found hyperventilating over the destruction to the old house.  J. had worked on properties before so was quite calm about it all, and the builders just looked at me as if I was a crazy woman (don't snigger, it's not attractive...).

This is the back of the house, upstairs. I'm actually typing this post from the spot where the photo was taken. It's now my study. The space that looks like a corridor is now my bathroom and beyond is another bedroom. 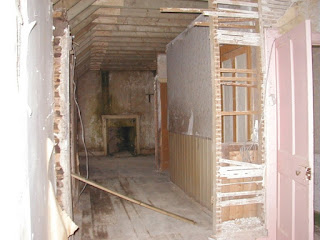 There were fireplaces in all the rooms and small cupboards to the side.  Much as fireplaces look attractive in a room, they also take up wall space and are draughty if you don't use them! As we planned on installing modern central heating we decided they would be blocked up.  We had wanted to keep the small cupboards to the side, but with modern insulation and then the wooden frame for the plasterboard, there wasn't much of a cupboard left. So the recesses are now sadly behind the plasterboard.

Once the upstairs was cleared the space looked amazing. Rather like a loft conversion! (Now for those of you that know the house, the window in the picture is facing onto the road at the front of the house). 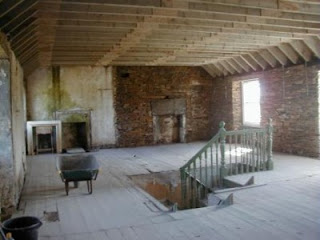 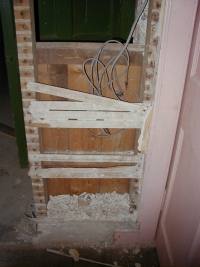 The staircase in the photo above was installed c1910 and is directly in front of what would have been the upstairs door leading to the external staircase. I love the massive stone over the fireplace in the corner! Imagine when this was built in1860 all this would be done by hand, with manual labour. Not easy getting a large stone like that onto the first floor. This would have made a lovely "loft style" conversion, but not really practical as we needed to get several rooms into this space!

Here is the same side of the house, with this window looking over the back of the house towards the lighthouse. (Did I mention I live next door to a lighthouse?).  This is the framework going up for the plasterboard and insulation. The fireplaces were blocked off and vented to prevent damp. 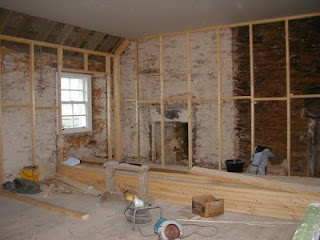 Meanwhile downstairs.... cue more hyperventilating. More destruction. I had some friends from the USA visiting at this time. I brought them over to the island to see the house. They were very quiet in here!! Just the odd "Oh my!" could be heard ;-) 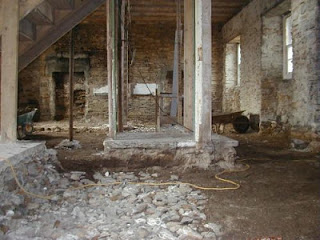 The front sitting room had looked like this before the builders got to work. They'd used this room when they were re-roofing and putting in windows. They lit the fire each day they were working and had their "piece-break" (Orcadian term for refreshment breaks) here. 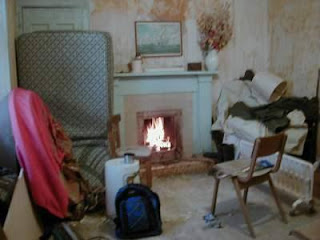 But despite my fears - the house gradually re-emerged. 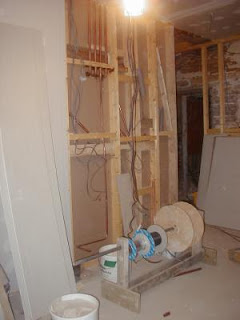 The mechanics of the underfloor heating were installed.... 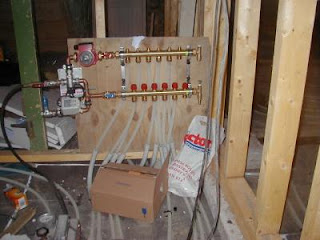 And walls were insulated, plasterboard attached to framing, and "taped and filled" to make a smooth surface. 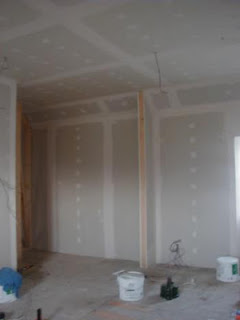 And facings put around the "edges".... 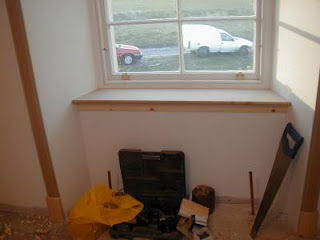 During this time J. was either still abroad or South so there were lots of photos being emailed re progress and discussions over questions raised by the builders.  I had also had to move out of the house on Hoy, which coincided with my starting my job at the Council. The only time I could visit was at weekends, and then usually just for the day as the builders had been given the caravan to use as a "site office" and "rest room". So it was quite a challenging time.  Though I had dear Fitzi-cat to help with the inspection - this are the glass blocks for the ensuite. 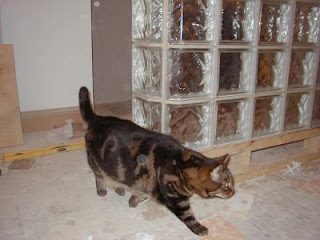 So more tomorrow on moving house (again) this time to Stromness, and moving IN.... amid the continuing renovations.....