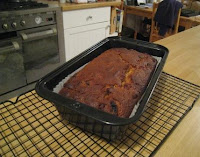 ..... I climbed into my snow boots (we don't have snow but it's icy), thick coat, hat, gloves, scarf and drove  to Irene and Bobby's house up the road to use their phone to report the problem..... and the telephone company (BT) after re-routing me three times and my telling them THREE times that NO, I did NOT know my account number as I was phoning from a neigbours, they then said THEIR systems were down and they couldn't divert my phone to my mobile EITHER!  Ah well I had a nice blether (chat) with Irene and her wee puss cat, Squeak, and am now home and about to have yet more tea and cake, which seems to be the only thing keeping me sane (relatively speaking)!

Button has been outdoors quite a bit today, enjoying "taking the air". For the last two days she's been "under the duvet" (actually under the throw that's over a sofa).

"Disturb me at your peril!"

Weapons remain on display in case there was any doubt..... 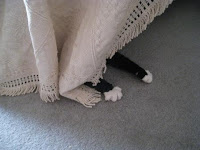