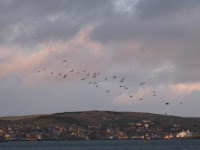 OK I've calmed down and I'll stop pleeping (moaning) now. Compared to folk on the West Cost of Scotland who have been without electricity and WATER for several DAYS since the storm, I am VERY lucky. I have a warm house, plenty of food, the house is safe and so am I.  My phone is working for incoming and outgoing calls and the internet is working - although the speed is v-e-r-y slow.

In Orkney the clear up operation is underway. The weather is calm and sunny, helping folk repair byre and shed roofs before the winds return this week. The causeway linking South Walls with the rest of Hoy and Walls has been repaired so traffic can cross, and there was a report of a poor orphaned seal pup being rescued and taken to the Orkney seal rescue centre run by Ross Flett in South Ronaldsay. The grey seal population in Orkney pup from September onwards. This particular pup was washed up onto a farmer's field in the storm. It will now be cared for till it can be returned to the wild.

Bizarrely given the amount of rain we have had recently, Scottish Water are asking people on the Orkney Mainland to conserve water!  Apparently one of the lochs is low and the treatment works can't keep up with demand.  "Water, water everywhere and not a drip to drink!" as the saying goes.  Last December we had our own problems with lack of water on Graemsay - thankfully not repeated. Our water comes from Sandy Loch on Hoy but also has to go through a treatment works which is unable to process the quantity needed....sigh.

Anyway I'm back from a bracing walk along the shore. Wonderful to get out into the fresh air and not battle the wind! The picture at the top of this post is looking towards the town of Stromness, with a flock of lapwings in flight - I startled them as I walked along the shore..... sorry birdies - as if you haven't had enough to contend with recently.

Here's is a local farmer gathering up seaweed for fertilizer - I'm hoping some makes it as far as my garden! 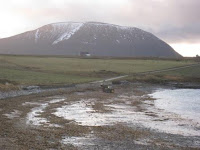 As you can see lots of seaweed blown onto the beach - but it looks like it protected most of the sand being washed away. Some winters the sand almost disappears.  Some remaining snow on Ward Hill on Hoy, but no snow or ice on Graemsay now.

This is the "shell" beach - lots of shells and cold-water coral still on the shore. Again some winters this almost disappears completely.

The sun hiding behind some clouds 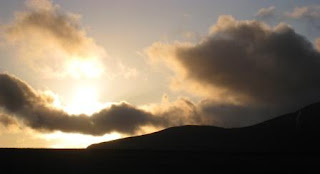